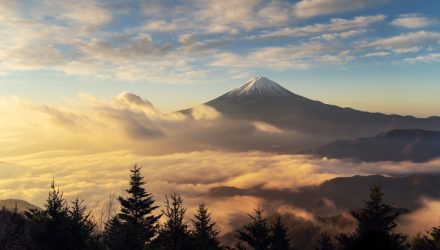 There’s at Least One Reason to Like Japan ETFs

The iShares MSCI Japan ETF (NYSEArca: EWJ), one of the largest Japan ETFs listed in the U.S., is up just 6.37% this year. While that lacks the returns offered by major U.S. equity benchmarks, there’s at least one reason investors should consider some exposure to Japan: companies there are at sitting on massive amounts of cash.

EWJ seeks to track the investment results of the MSCI Japan Index, which consists of stocks traded primarily on the Tokyo Stock Exchange. It may include large- or mid-capitalization companies.

“Firms listed in Japan held 506.4 trillion yen ($4.8 trillion) in cash as of their latest filings, the highest level on record, according to data compiled by Bloomberg. It’s more than tripled since March 2013, months after Prime Minister Shinzo Abe returned to power vowing to stamp out cash-hoarding,” according to Bloomberg.

Japanese stock markets have remained range-bound for most of 2019 as it slowly recovers from the recent selling pressure. Nevertheless, the developed market is still outperforming the global developed ex-U.S. equities benchmark and it is less expensive. BlackRock, though, maintains a neutral outlook on this country.

EWJ yields just 1.59%, but some market observers believe there is ample room for Japanese companies to bolster buybacks and dividends even further, although buybacks there have surged to record highs.

“Companies are providing larger returns to shareholders since Abe’s government instituted new rules for investors and executives starting in 2014. But Zuhair Khan, head of research at Jefferies Japan Ltd., estimates they’re only distributing about 40% of profits to stock owners when they could afford to pay out about 70%,” according to Bloomberg.