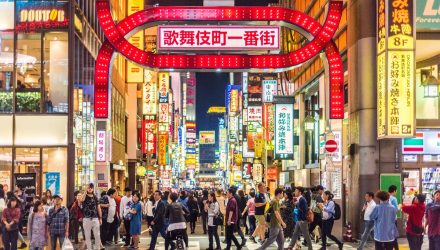 The iShares MSCI Japan ETF (NYSEArca: EWJ), one of the largest Japan exchange traded funds (ETFs) listed in the U.S., is up nearly 10% this year and recently saw a substantial influx of assets.

EWJ seeks to track the investment results of the MSCI Japan Index, which consists of stocks traded primarily on the Tokyo Stock Exchange. It may include large- or mid-capitalization companies.

What’s Next for EWJ ETF

“And while EWJ has gained a respectable 9% since the start of 2019 — thanks in part to the newly regained support of its 50-day moving average — it’s not difficult to see why investor enthusiasm is currently lacking toward this particular Japanese equity tracker,” according to Schaeffer’s. “Since the very first day of April, EWJ has been butting its head unsuccessfully against resistance at the $55.50 level. This region has been a technical sticking point since it was breached to the downside during a late-October bear gap, and it has held firm as a technical ceiling this month despite multiple challenges by the shares.”

“Investors may yet be due for a bit more consolidation and coiling on the part of EWJ shares before we witness a big breakout one way or the other, as the island nation now begins a week-plus trading holiday,” notes Schaeffer’s. “But in any event, the next update on Japanese equity flows should be illuminating, given that the aforementioned round of data directly preceded the central bank’s Thursday decision to finally reveal an approximate duration for its ultra-accommodative policy stance.”