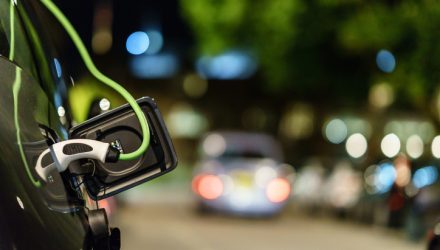 Tesla Rally is Good News For This ETF

Shares of Elon Musk’s Tesla Inc. (NASDAQ: TSLA) rallied anew on Monday, extending the stock’s gain over the past month to a staggering 38%.

That’s good news for Tesla-heavy ETFs, such as the VanEck Vectors Low Carbon Energy ETF (NYSEARCA: SMOG). SMOG tracks the Ardour Global Index  Extra Liquid (AGIXLT) and allocates 11.44% of its weight to Tesla, one of the largest weights to the electric carmaker among all ETFs.

“The index is intended to track the overall performance of low carbon energy companies which are those companies primarily engaged in alternative energy which includes power derived principally from biofuels (such as ethanol), wind, solar, hydro and geothermal sources and also includes the various technologies that support the production, use and storage of these sources,” according to VanEck.

One of the qualifiers for admission to SMOG is that “global companies must derive at least 50% of total revenues from low carbon energy (i.e., alternative energy) to be added to the Index,” notes VanEck.

Shares of Tesla were boosted Monday after Jefferies analyst Philippe Houchois boosted his price target on the stock to $400 from $300, implying a decent level of upside from the $345 area at which the stock resided at this writing.

“To justify the $400 target price, Houchois sees three-year average sales growth of 25%, based on higher Model 3 sales and a successful introduction of the Model Y, Tesla’s smaller sport-utility vehicle,” reports Al Root for Barron’s. “That means Tesla sales would be about $47 billion by year-end 2022, up almost 100% over three years.”

Last month, Tesla also said it was well-advanced in its long-awaited Model Y crossover, which it now anticipates will launch by next summer. The electric car company also says it is planning to make a limited run of its Tesla Semi truck next year and expects to soon announce the location of its European Gigafactory, where it plans to begin manufacturing electric vehicles in 2021.

Related: Tesla Earnings Set For After The Close As Fatal Crash Taints Headlines

Tesla’s burgeoning solar business is another catalyst for the stock and the SMOG ETF.

“The goal is to have solar roofs that look better than a normal roof, generate electricity, last longer, have better insulation and have a lower installed cost than the price of a roof plus the price of electricity,” Musk said, during the  company’s recent earnings call. “The solar-glass roof is not going to make financial sense for somebody who has a relatively new roof, because this is itself a roof that has integrated solar power generation. We are doing installations as fast as we possibly can, starting in the next few weeks.”