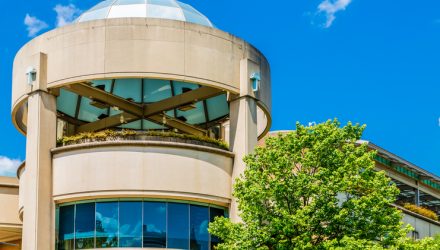 Municipal debt and bond-related exchange traded funds have been used as a relatively stable fixed-income stream for many investment portfolios. Due to the 2017 changes in the tax code, some states are seeing soaring municipal bond valuations.

“While the 2017 Tax Cuts and Jobs Act penalized taxpayers in blue states, it helped their state governments’ financing costs,” reports Alexandra Scaggs for Barron’s. “Blue state bond valuations have soared since the tax law’s 2018 implementation. One reason: the tax law’s limit on state and local tax deductions, which pushed investors in those high-tax states into the muni market in search of more tax-exempt income.”

The $1.8 billion ITM allocates over 30% of its combined weight to bonds issued by California and New York with Illinois representing another 4.5%, according to issuer data.

Investors are displaying big appetites for municipal debt, but some states are having difficulty bringing sufficient supply to market.

“So far this year, investors have bought muni funds at a pace exceeded only during the financial crisis in 2009, according to Lipper data going back to 1992,” according to Barron’s. “There’s a problem, however: State and local governments haven’t been able to borrow enough to meet investors’ appetite.”

Since muni bond interest is exempt from federal taxes, muni ETFs are a good way for investors seeking tax-exempt income, especially those in higher tax brackets. Due to its tax-exempt status, the asset category is also best utilized in taxable accounts.

“The muni market is now smaller than it was a decade ago, according to data from the Securities Industry and Financial Markets Association, or Sifma,” reports Barron’s. “There were $3.6 trillion of munis outstanding at the end of the first quarter, down from nearly $4 trillion in 2009. That’s partly because the tax bill removed the tax exemption on bonds sold in so-called advance refundings, a popular method of refinancing muni debt.”