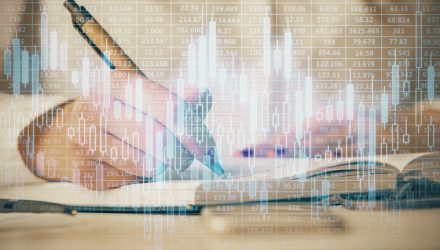 The VanEck Vectors Morningstar Wide Moat ETF (MOAT) is home to stocks that are attractively valued and tied to companies with deep competitive advantages.

In theory, that’s a tough combination to find because a company with strong edges over rivals can command premium multiples. However, the Morningstar Wide Moat Focus Index, MOAT’s underlying benchmark, provides an efficient avenue for unearthing wide moat names that aren’t stretched on valuation.

Indeed, that methodology results in something of a barrier to entry (MOAT holds just 46 stocks), but the exchange traded fund’s exclusivity ensures that investors are getting what’s advertised. Add to that, a fair portion of MOAT’s roster is arguably undervalued today, indicating that MOAT is an idea for long-term investors to consider over the near term.

“Moreover, wide-moat companies–those with unassailable competitive advantages–may be the place to be today, given the market’s recent choppiness and ongoing questions about inflation in the new year,” says Morningstar’s Susan Dziubinski. “The Morningstar Wide Moat Focus Index is therefore a fertile hunting ground for investors looking for high-quality stocks trading at reasonable prices.”

“One of the big three credit bureaus, Equifax (EFX) enjoys strong operating leverage from incremental revenue, thanks to the fixed costs inherent in its business, says analyst Rajiv Bhatia. Its workforce solutions segment has been a standout in recent years, he adds,” notes Dziubinski. “Despite near-term headwinds, multi-industrial conglomerate Emerson Electric (EMR) is primed for several years of positive organic growth, argues analyst Josh Aguilar. And with a new CEO in place, we wouldn’t be surprised to see management and the board revisit a potential breakup.”

What’s interesting about the MOAT methodology is that while valuation is an integral ingredient, that doesn’t mean the ETF excludes growth stocks. In fact, several members of the ETF’s roster fit the bill as growth fare, including Walt Disney (NYSE:DIS) and Latin American e-commerce giant MercadoLibre (NASDAQ:MELI).

“Walt Disney (DIS) is successfully transforming its business to keep pace in the evolving media industry, says senior analyst Neil Macker. Its media networks and collection of Disney-branded businesses have demonstrated strong pricing power, and its streaming services will be drivers of long-term growth,” according to Dziubinski. “MercadoLibre (MELI) is a one-stop e-commerce solution for Latin American buyers and sellers. Customer expectations for quicker shipping times and increased fulfillment penetration should make the firm’s services all but irreplaceable, says analyst Sean Dunlop.”