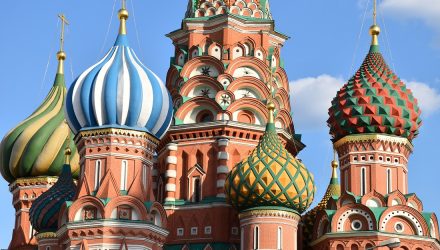 Russia ETF Can Rally Beyond Its 14% YTD Gain

The VanEck Vectors Russia ETF (NYSEArca: RSX), the largest Russia exchange traded fund (ETF) trading in the U.S., is higher by more than 14% this year and is beating the MSCI Emerging Markets Index by more than 220 basis points.

“Political clouds, and the country’s own snail’s-pace macro growth, have obscured the dynamism of Russia’s corporate sector, adds Jacob Grapengiesser, a partner at Stockholm-based East Capital,” reports Craig Mellow for Barron’s. “He anticipates 18% average profit growth this year for listed companies, even as gross domestic product limps along at about 1.5%.”

Russia is one of the world’s largest oil producers and the $1.4 billion RSX reflects as much with a weight of 41% to the energy sector.

Russian crude oil producers have also seen revenue from rising oil magnified due to the weakening ruble currency as crude oil is priced in U.S. dollars, which helped industry achieve record-breaking revenue and shrink debts. While Russia is a dominant oil producing and is pumping crude at post-Soviet era records, there is more to the economic story there.

“The other stand-out consumer-facing company is Yandex (YNDX), which is evolving from Russia’s Google into its Uber, as well, with the mushrooming growth of Yandex Taxi,” according to Barron’s. “The company’s earnings before interest, taxes, depreciation, and amortization will leap by 69% this year, Grapengiesser predicts, spelling further gains for the stock despite its 35% rise year to date.”

Related: Oil’s Hot, But These 10 Energy Equity ETFs Are Cheap

Yandex is a top 10 holding in RSX and the communication services sector is RSX’s third-largest sector weight at 13.20%.

However, the Russian market is not without risks. There are growing concerns that the U.S. could toughen sanctions on Russia, a move that would pressure Russian sovereign debt. Investors have pulled $98.12 million from RSX this year.