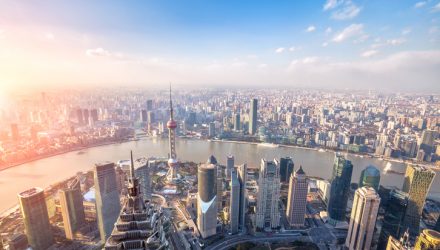 As fears over the global economy and tar war continue to contribute to market volatility, investors have yanked billions from ETFs that track China’s stock market.

Among the most hated China-related ETFs of the past month, the iShares China Large-Cap ETF (NYSEArca: FXI) saw $487 million in net outflows, the iShares MSCI China ETF (NASDAQ: MCHI) experienced $509 million in outflows and the Xtrackers Harvest CSI 300 China A-Shares ETF (NYSEArca: ASHR) shrunk by $261.9 million, according to ETFdb data.

A round of new tariff threats on Chinese goods, lackluster economic data and a weakening yuan currency have all contributed to increased pressure on China’s market and further fueled concerns over a global slowdown, pushing investors away from riskier emerging market assets toward safe-haven plays like U.S. government bonds.

“Markets have had a panic attack in August,” Michael Kelly, global head of multi-asset for PineBridge Investments, told FT. “There is a confluence of uncertainty and it’s rattling all markets and you can see it’s impacting the China A-shares market, which has led to outflows.”

In China, growth in industrial output slowed to its weakest in 17 years, according to the latest July data. Meanwhile, Beijing allowed its yuan currency to break through a key threshold of 7 to the U.S. dollar, triggering fears that the trade war has entered a new stage where world governments could utilize currency manipulation as another tool.

Trade tensions also intensified between the U.S. and China after President Donald Trump announced a new 10% levy on the rest of the $300 billion in Chinese goods that would take effect in September before later delaying this new tariff.

“Outflows from Chinese stocks are definitely on our radar,” Dave Chapman, head of multi-asset portfolio management for Legal & General Investment Management America, told FT. “The depreciating currency, capital controls, the effects on profitability of Chinese companies — these issues are interrelated and can be a true tail risk.”