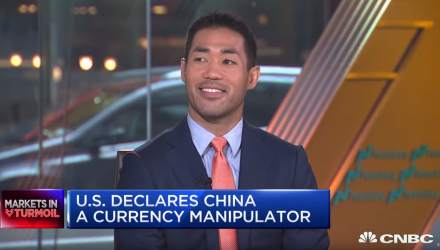 Dan Suzuki, portfolio strategist at Richard Bernstein Advisors, joined CNBC’s “Squawk Box” on Tuesday to discuss how best to play the weakness in the markets.

It has become increasingly clear that investors are disappointed by the lack of follow-through with the trade war with China, and that it is now having a pronounced effect on the market, combined with a lack of the Fed taking sufficient action.

Suzuki said he has been talking about how the fundamentals have been consistently slowing, adding as the fundamentals have been consistently slowly, RBA has been taking down the risk profiles of its portfolios and investing in the more defensive higher-quality sectors of the economy.
“Those are the sectors that are working,” Suzuki said. “So this is exactly why. Because this year there have been three hopes for the fed. There’s been a hope trade going on. It’s been in the Fed. It’s been that earnings will bottom, and it’s been that the trade talks will get resolved. Well those three things are not coming through, and that I hope trade is starting to fizzle. And I think that’s the ultimate story because just think about you’ve had the Fed and trade be the big distraction over the last three or four months. Now you’re forced to focus back on the fundamentals.”
However, weak earnings could also play into the lack of stock performance that is occurring, according to Suzuki.
“Just look: we’re almost done with second quarter earnings season. This is the third or fourth consecutive quarter of deceleration. And it’s not just like slow or positive. If you look at the components, the cyclical sectors all have negative earnings year-over-year. So this is what we’re talking about, and this is looking like it’s going to continue into the back half of the year, because look at what the guidance is giving. The guidance you’re seeing during discerning season is probably some of the worst you’ve seen since coming out of 2016.”
Suzuki does not feel that China is truly devaluing its currency, as President Donald Trump claims, but is in a process of deterioration that has been happening for some time.
“I think there’s two different dynamics going on,” he said. “I think the market reading into it being a currency war was over done. At most you’re going to get you know a currency schoolyard fight. It’s like a little moves. They I have very little interest in massively do you valuing their currency. What happens if they do that you’re going to see massive capital outflow’s, and they don’t want to see that either.”
As a result of the fall in U.S. equities, Suzuki sees opportunities overseas as the best bet for capital allocation.
“We’ve been lowering consistently our U.S. equity exposure and we’ve been moving abroad…China we think is your best risk-reward bet, given that no-one wants to touch that with a ten foot pole,” Suzuki added.