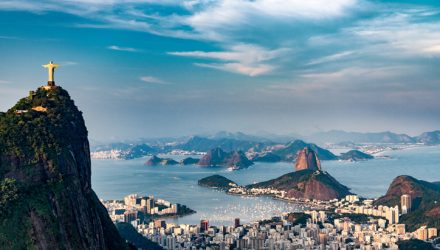 Recent Dip Could be a Buying Opportunity in Big Brazil ETF

Last month, Brazilian equities hit record highs after the Senate Constitutional and Legal Affairs Committee approved the text of a long-waited pension reform bill, setting the stage for a second and final vote.

However, as market participants work through those negative news items, EWZ could be poised to regain its bullish ways that have seen the fund outperform the MSCI Emerging Markets Index this year.

Investor sentiment for Brazilian assets has grown more bullish as the country’s central bank is largely expected to cut the already record-low interest rates in light of the slower-than-expected economic recovery and moderate inflationary pressures. Brazil’s central bank has been active in cutting interest rates, which has boosted stocks but depressed the local currency, the real.

“Sinking interest rates also have their downside for global investors. They reduce the attraction of Brazilian bonds, which weighs on the currency and the dollar value of stocks. The real has slid 20% over the past two years. Stocks have risen 16% anyway since Bolsonaro won first-round presidential voting last October, crushing a 4% gain for global emerging markets,” according to Barron’s.

Much of the rate-cutting regime is centered around supporting Latin America’s largest economy and ending its flirtation with a recession.

Brazil has suffered this year from high unemployment, weak industrial production, economic troubles in neighboring Argentina and a worsening global growth outlook due to a protracted U.S.-China trade war.