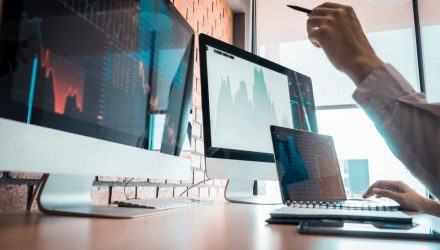 With a little bit of luck and a lot of good timing, MOAT’s underlying index rebalanced around the March market lows, enabling investors holding the fund at that time and those that purchased it soon thereafter to participate in rebounds in previously downtrodden names.

“Boeing (BA) was added to the index for the first time when it was trading at a 70% discount to Morningstar’s fair value,” said VanEck in a recent note. “At the end of April, Morningstar reduced Boeing’s fair value estimate approximately 15%, citing its debt burden associated with the continued 737 MAX grounding. Despite this reduction in fair value estimate, Boeing ended the month of May trading at nearly a 50% discount to fair value and has returned 53.51% since being added to the index.”

According to Morningstar’s indexing methodology, there are five sources of economic moats: Intangible assets that include brand recognition to charge premium prices. Second, switching costs make it too expensive to stop using a company’s products. Third, network effects that occur when the value of a company’s service increases as more use the service. Fourth, a cost advantage that helps companies undercut competitors on pricing while earning similar margins. Finally, an efficient scale associated with a competitive advantage in a niche market.

“Constellation Brands (STZ) has also posted an impressive 44.94% return in the short time it has been in the index. The beverage company—which derives its moat from its intangible assets, one of Morningstar’s five sources of moat—finished May at a 20% discount to fair value,” notes VanEck.

Intangible assets include “patents, brands, regulatory licenses, and other intangible assets can prevent competitors from duplicating a company’s products, or can allow the company to charge a significant price premium,” said VanEck in a recent note.