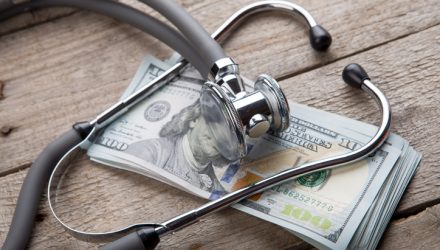 The iShares U.S. Healthcare Providers ETF (NYSE: IHF) appeared to be off to a fine start to 2020. Then came last week’s market tumble. While broader markets were punished by coronavirus headlines, IHF suffered a different brand of punishment.

With the Iowa Democratic caucus scheduled for Monday and Vermont Sen. Bernie Sanders, a supporter of Medicare For All surging in the polls, markets are becoming concerned about the near-term outlook for managed care providers, the companies residing in IHF.

“Among US equity sectors, Health Care stocks have traded most closely with the 2020 Democratic primary race so far,” Barron’s reports, citing Goldman Sachs. “The sector also shows the highest volatility risk premium and implied volatility ‘bump’ around Super Tuesday,” referring to March 3, when a host of states hold nominating contests.”

A recent Wall Street Journal article indicates the Trump Administration is planning to reveal a plan that would allow states to revert “Medicaid funding to a fixed federal block-grant model. The plan, long supported by Republicans, has faced Democratic opposition, and seemed dead,” according to Barron’s.

That is seen as making IHF components, such as UnitedHealth (NYSE: UNH), CVS (NYSE: CVS) and Centene (NYSE: CNC) vulnerable. Those stocks combine for over 41% of IHF’s roster. Bottom line: President Trump and Republicans are looking for some kind of healthcare victory because it’s an issue the party has struggled with for some time.

Conversely, Medicare For All is seen as a drag on IHF components, something markets have confirmed on multiple occasions.

Related: Targeted ETFs to Hone in on Innovative Growth Ideas for 2020

IHF has been dogged this year by speculation that Medicare For All could become a reality if Democrats win the White House in 2020. Many of the most visible Democratic contenders for that party’s 2020 presidential nomination are embracing Medicare For All. The fund lost more than 4% last week.

“While passing the so-called single-payer health-care plan that the senator favors would require a huge and highly uncertain legislative battle, a Sanders win, or strong performance in early states would be a clear indication that the Democratic Party is shifting to the left on health-care policy generally,” according to Barron’s.