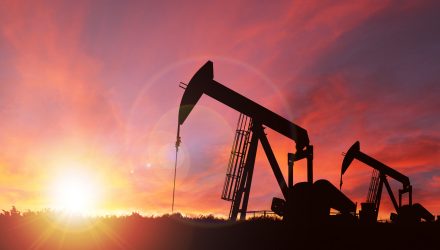 Despite a brief spike following an attack on Saudi crude tankers, energy services stocks and sector-related exchange traded funds plunged and were among the worst performing areas of the market Monday as crude oil prices retreated on the broad risk-off sentiment.

Oil futures were briefly higher Monday on an apparent attack on Saudi crude tankers in the Gulf, but the energy market pared earlier gains in response to the broader risk-off sentiment in the markets.

“It was impressive to have increases [in oil prices]when equities were down more than 2%, so the macroeconoomic downdrafts have caught up with the geopolitical updrafts,” Tom Kloza, global head of energy analysis at the Oil Price Information Service, told MarketWatch. “All things being equal, oil should head higher, but it can’t appreciate in value if we get a stock market meltdown.”

Prices had climbed early in the session, “on increasing concerns about supply disruptions in the Middle East even as investors and traders fretted over global economic growth prospects amid a standoff in the Sino-U.S. trade talks,” analysts at ICICI Bank said.

However, riskier assets retreated Monday on renewed trade concerns after the U.S. and China failed to reach a trade deal Friday and trade tensions escalated in response to China’s announcement of retaliatory tariffs on U.S. goods. Beijing said it would lift tariffs on U.S. products to as high as 25% after the U.S. on Friday increased tariffs on $200 billion on Chinese goods to 25% from 10%.

“There is a wariness that a prolonged trade dispute could lead to slower economic and oil demand growth,” Marshall Steeves, energy markets analyst at Informa Economics, told MarketWatch. “U.S. production also is rising albeit in fits and starts.”