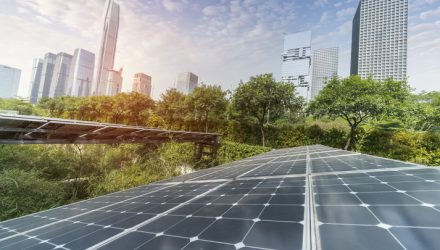 The NYSE Pickens Oil Response ETF (NYSEArca: BOON) is no longer with us. As was previously reported, BOON was slated to shift its investment objective, index and become the Pickens Morningstar Renewable Energy Response (NYSEARCA: RENW), a conversion that was completed on Wednesday.

The new RENW follows the Morningstar North America Renewable Energy Index, which is designed “to provide exposure to companies that operate across the full renewable energy supply chain, including renewable energy innovators, suppliers, adopters, and end-users,” according to TriLine Index Solutions, the index and ETF development arm of Boone Pickens Capital Fund Advisors.

The decision to reconfigure BOON into a renewable energy ETF comes at a time when fossil fuel stocks are struggling, and alternative energy names are soaring. In fact, some of this year’s best-performing non-leveraged ETFs are alternative energy funds. Renewables’ share of power generation is also increasing.

RENW is a departure from legacy alternative energy ETFs in that it does isolate a specific concept such as solar or wind.

“The index is composed of two distinct constituent groups,” according to TriLine. “The first constitutes 75% of the total index weight and consists of companies with meaningful revenue from renewable energy production or participation in businesses that rely on renewable energy, such as green transportation. The second group constitutes 25% of the total index weight and includes companies that are leaders in meeting their primary energy requirements from renewables.”

Related: Inside the Allure of a Genomics ETF

RENW also has a lineup of 82 stocks, which is large compared to some of the established competing funds in this category. Just one of those holdings exceeds a weight of 3%. RENW allocates 46% of its weight to the utilities sector, and the fund offers long-term growth potential.

“The share of renewables in meeting global energy demand is expected to grow by one-fifth in the next five years to reach 12.4% in 20232. RENW aims to offer long-term exposure to the growing future of energy,” according to TriLine.