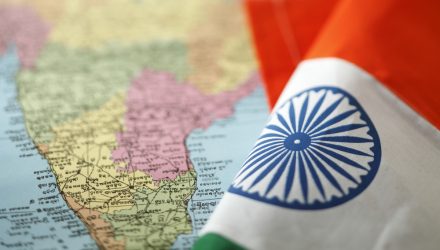 Among India-focused exchange traded funds, the VanEck Digital India ETF (DGIN) is the new kid on the block, having debuted last month.

However, DGIN could be at the right place at the right time as more countries in the Asia-Pacific region turn to India for business in an effort to diversify trade streams away from controversial governments in China and Russia.

India’s status as a member of the Quadrilateral Security Dialogue, also known as “the quad,” could be useful to investors. The other quad members are Australia, Japan, and the U.S.

“The Quad is willing to look past India’s refusal — including in four recent UN resolutions — to condemn Russia’s invasion of Ukraine,” reports Ravi Buddhavarapu for CNBC. “An informal grouping, the Quad works to deepen strategic cooperation on issues related to security, technology and the economy while implicitly countering China’s assertiveness in the Indo-Pacific.”

The newly minted DGIN follows the MVIS Digital India Index, which is comprised of companies with leverage to the digitization of Asia’s third-largest economy. That’s a compelling attribute because India is a tech-savvy economy where consumers are adept at mobile device usage, but internet penetration is still low compared to major developed economies, indicating that there’s ample runway for growth.

Additionally, it’s not lost on global investors that India is the world’s largest democracy, which is certainly a favorable trait at a time when China and Russia are highlighting the dangers of investing in economies controlled by autocratic governments.

“India’s value as a democracy and capacity as the only other military power able to push back against Chinese aggression in Asia is not lost on the Quad. But a lot will depend on how well India — more nimble under Modi — articulates its position on Ukraine,” according to CNBC.

DGIN features a concentrated portfolio of just 35 stocks, but it’s also reflective of the new economy opportunity set in India. For example, the VanEck fund largely skirts state-owned enterprises and allocates 81% of its weight to the technology and communication services sectors, two sectors known for overt growth profiles. DGIN’s top 10 holdings combined for 62% of the fund’s roster as of the end of February, according to issuer data.