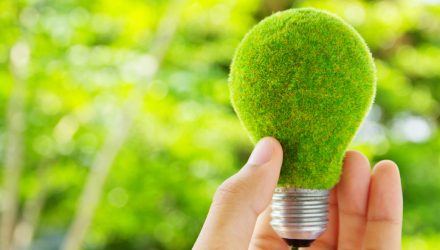 And even more good news is here. Data from the Energy Information Administration (EIA) indicate renewable energy sources have toppled coal for the first time.

“While the United States’ coal industry has been for years losing ground to alternative energy sources, including shale and natural gas, renewables have surpassed the fossil fuel for the first time, official data shows,” reports Cecilia Jasmine for Mining.com.

In Awe Of ACES ETF

“The breakthrough reflects the declining cost of solar and wind and also heightened environmental concerns about coal,” according to Mining.com. “Some of it is also because of seasonal issues, such as planned shut downs for some coal plants maintenance during the spring, when demand for electricity is low. Those months, analysts warn, also tend to be a strong period for hydro and wind power.”

“Since peaking in 2008, US coal consumption has plunged 39% to the lowest level in 40 years, despite President Donald Trump’s promises to prop up the industry by revoking or lightening up environmental rules,” reports Mining.com. “The country’s renewable energy sector proved to have slightly more installed capacity than coal, which means that US power plants were able produce more energy from clean sources than the fossil fuel in April, for the first time in history.”