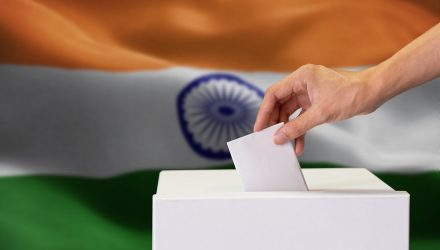 India ETFs Surge on Expectations of Modi Serving Another Term

While cautious, David Cornell, fund manager at India Capital Growth Fund, pointed out that the Modi government has succeeded in restructuring aspects of the Indian economy in a way that has pleased investors, the Wall Street Journal reports.

“The electorate thinks Modi is the best person to help India to catch up with its peers across Asia,” Cornell told the WSJ.

Voting in India has been going on for weeks and early exit polls on Sunday revealed that Modi’s ruling Bharatiya Janata Party and its allies could take over 300 of the 543 seats in India’s lower house of Parliament. The official count will be released Thursday, and investors should take the exit poll counts with a grain of salt since they have been proven incorrect in the past.

Some market observers are already looking at Modi’s government as a friendly alternative if multinational businesses grow wary about their presence in China, given the heightened trade tensions between the U.S.

“It may start to look like quite a good alternative to a mercantilist tiff between two of the largest economies in the world,” Cornell said.

Modi originally came up in 2014, pledging to revive growth and combat corruption. India’s equity market has steadily strengthened under his guidance.

India’s economy expanded 6.6% in the final quarter of 2018 year-over-year, its slowest pace in over a year and was lower compared to the 7% in the previous quarter.

Looking ahead, many anticipate a Modi win will be a continuation of the status quo rather than signs of any major reforms. Modi has promised support for India’s population of agricultural workers, increased infrastructure investment and more youth jobs.