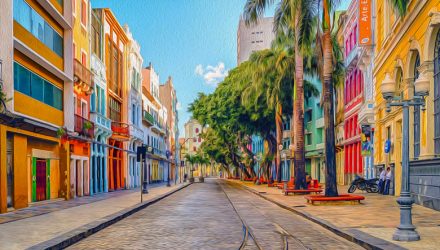 A cornerstone of Brazilian President Jair Bolsonaro’s campaign was reforming the country’s pension system. It was those expectations, among others, that lifted the iShares MSCI Brazil Capped ETF (NYSEArca: EWZ) and the VanEck Vectors Brazil Small-Cap ETF (NYSEArca: BRF) following Bolsonaro’s elections.

Bolsonaro has promised wide-ranging reforms aimed at stomping out corruption in Latin America’s largest economy. His ability to make good on the promised reforms is seen as pivotal to the fortunes of Brazilian assets in 2019.

“A pension breakthrough could open the gates for reforms of Brazil’s dysfunctional tax system and sclerotic labor regulations, not to mention igniting private investment and leaving the central bank room to cut interest rates,” reports Craig Mellow for Barron’s.

New Brazilian President Jair Bolsonaro has made privatizing state-owned companies and overhauling a costly pension system both key points in his administration as a way to cut down the soaring public debt and regain foreign investors’ confidence in the Latin American economy.

Brazil’s government has previously put money into the pension system to shore it up, but given the fragile nature of the government’s finances, increasing fiscal deficits could be viewed as unappealing by investors.

“The cautious outlook reflects memories of 2017, when pension reform seemed on the verge of passing until prosecutors charged then-president Michel Temer with corruption and racketeering,” according to Barron’s. “Similar shocks to the system are possible this time around, notably from embezzlement probes swirling around Bolsonaro’s son Flavio, a senator representing Rio de Janeiro.”