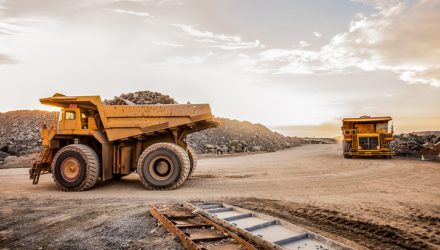 The once forgotten VanEck Vectors Rare Earth/Strategic Metals ETF (REMX) has been in the spotlight this month as China, the largest exporter of rare earths minerals, has threatened to restrain supply as part of its ongoing trade war with the U.S.

The rare earths ETF rallied again Wednesday after a Chinese official said rare earths should not be used as leverage against China in the trade war.

“The moves came after a Chinese official recently cautioned that products made from rare earth minerals should not be used against the country’s development,” reports CNBC. “The comment, reported by CCTV, was taken as a thinly veiled threat aimed at the U.S. and its technology companies that are dependent on the materials. Chinese President Xi Jinping recently visited rare earth mining and processing facilities, adding to speculation that China could make the minerals more expensive or unavailable if the trade war continues to expand.”

Rare earth metals are crucial factors in the 21st century, as they are a part of industries as disparate as electronics, mobility, and sustainable energy. Strategic Metals include rare earth elements as well as specialty metals used in nuclear reactors, LEDs, magnets, electric motors, sensors and many other components used in smartphones, flat screens, hybrid vehicle, and our homes. Now they are becoming available for physical investment, including secure storage in bonded warehouses.

“At present, China is the world’s largest producer of rare earths, a critical component in the manufacturing of products ranging from smartphones to electric vehicles,” according to CNBC.

With a handful of Chinese names in the fund holdings as well, the REMX may provide an opportunity to participate in market movement based on the current trade war environment.