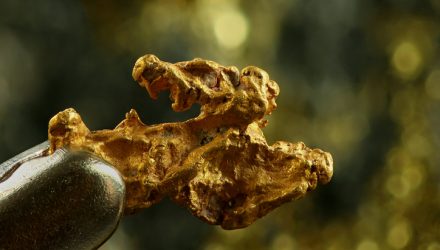 This year, investors have embraced gold and the related ETFs due to elevated market uncertainty stemming from trade wars and recession speculation, among other factors. That uncertainty has boosted the case for funds, such as VanEck Vectors Gold Miners ETF (GDX).

GDX is comprised of global gold miners, with a notable tilt toward Canadian and U.S. mining companies. Stock fundamentals like cost deflation across the mining industry, share valuations below the long-term average and rising M&A are all supportive of the miner’s space as well, but those fundamentals could be glossed over if the dollar strengthens. There are indications that the current gold bull market could last awhile.

While GDX lost nearly 4% as riskier assets came back into favor, there are reasons to believe gold can deliver more upside this year.

“Trade tensions have become trade wars and trade wars are threatening to become currency wars,” said VanEck in a recent note. “Gold moved to a fresh six-year high of $1,555 per ounce on August 26 as markets reacted to retaliatory threats and actions between the U.S. and China. It looks as if the established superpower and the emerging superpower have begun an economic war for global supremacy. The uncertainty is creating a drag on commerce at a time in the cycle when it might do the most damage to the global economy. At the same time, central banks across the globe are cutting rates in an attempt to offset recessionary forces.”

“Higher gold prices have not deterred central banks, as they continued buying in July. They are currently on a pace to exceed the 2018 volumes, which were the second strongest on record. Top buyers in 2019 are Russia, Poland, China, Turkey, and India. Trade wars and sanctions are giving emerging countries added incentive to add more gold to their foreign exchange reserve,” according to VanEck.

Of course, declining interest rates buoy the case for gold ETFs and miners funds, such as GDX.