You are at:Home»Beyond Basic Beta Channel»Gold and the Cycles of History 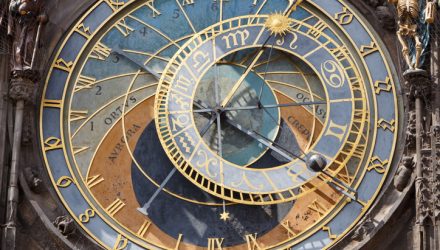 Gold and the Cycles of History

Following the June breakout, the gold price spent July consolidating gains above the $1,400 per ounce level. Gold was supported by dovish comments from the U.S. Federal Reserve Bank (Fed) and European Central Bank (ECB) officials. Before the House Financial Services Committee on July 10, Fed Chairman Jerome Powell described increases in uncertainties; issues with trade, debt and Brexit; and the weakness of global manufacturing and investment all around the world. Gold reached a new six-year high of $1,453 on July 19 with further dovish comments from Federal Reserve Bank of New York chief John Williams and Fed Vice Chairman Richard Clarida, who talked of deflationary pressures and made aggressive comments on rate cuts. On July 25 after the ECB Governing Council meeting, Chairman Mario Draghi described an outlook that is getting worse and worse. The Fed kicked off the global easing cycle as expected on July 31 with its first-rate cut since 2008.

Gold was not deterred by the U.S. dollar, as the U.S. Dollar Index (DXY)1 ended July at the top of its recent range. Interest rates, rather than the U.S. dollar, have become the primary driver for gold. Real rates (adjusted for inflation) are near zero or negative for over half of the debt outstanding globally. When rates are so low, gold becomes competitive with interest-bearing investments in addition to its qualities as a store of wealth. We expect gold and gold shares to perform well for the duration of this rate-cutting cycle. If, as in cycles past, this cycle ends in recession, risks could emerge that drive gold much higher.

Silver sprang to life in July, adding conviction to the recent gains in the gold price. According to Bloomberg data compiled on silver-backed exchange-traded products (ETPs), July saw record inflows into the space and holdings also rose to a record high while volume spiked higher in Shanghai commodities trading. There was no fundamental news that could account for the move, as the price of gold is usually the main driver for silver. The staying power of gold prices during July focused attention on the extreme undervaluation of silver compared to gold. The gold/silver ratio had reached a 29-year high of 93 in June, compared to the 10-year average of 66. Silver usually outperforms gold in a strong market due to lesser liquidity and a more speculative nature. For the month, gold advanced $4.45 (0.3%) to $1,413.90, while silver gained $0.95 (6.2%) to $16.26 per ounce and the gold/silver ratio dropped to 87.

Gold stocks outperformed the metal again in July with the increased interest in the gold sector. The NYSE Arca Gold Miners Index2 advanced 4.6%, while the MVIS Junior Gold Miners Index gained 8.8%. When gold moves higher, the performance of smaller companies typically lags the larger companies initially. As the move continues, the smaller companies usually catch up and pass the larger ones. Investment management firm Paradigm Capital Management analyzed gold companies’ performance in the strong gold market during the first half of 2016 when gold rallied $300 per ounce. Paradigm found the senior producers performed the best initially, but were surpassed by the junior producers after three months from the cycle low. Junior developers surpassed the seniors at four months, while intermediate companies outgained the seniors after five months.

Many developments over the past decade have made it feel as if the world is falling backwards to a more dangerous and threatening time. Examples include Brexit and the potential failure of the European Union, polarizing politics in the U.S., extremist violence globally, the Russian invasion of Crimea, Chinese expansion into the South China Sea, and growing tensions between military powers. We thought global leadership was more mature and enlightened than to allow any of this to happen.