You are at:Home»Beyond Basic Beta Channel»Finding Efficiency, Income in Mid-Caps 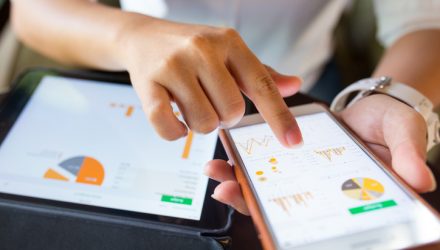 Mid-cap stocks are often seen as the overlooked segment of the equity market. With that, the group’s dividend capabilities are also overlooked by some investors. The WisdomTree U.S. MidCap Dividend Fund (NYSEARCA: DON) is one of the exchange traded funds that can change investors’ views of dividends and mid-caps for the better.

DON tracks the WisdomTree U.S. MidCap Dividend Index. That benchmark is “dividend weighted annually to reflect the proportionate share of the aggregate cash dividends each component company is projected to pay in the coming year, based on the most recently declared dividend per share,” according to WisdomTree.

While some market observers believe there are inefficiencies associated with smaller stocks, including mid-caps, DON’s methodology can help quell some of those inefficiencies.

“If prices reflect all available information, then riskier stocks must be discounted to compensate investors for taking that risk. The first quintile of stocks sorted by book-to-price (B/P)—the most inexpensive, riskiest stocks—underperformed the fifth quintile by 183 bps,” according to WisdomTree research.

Depend on DON ETF

Mid-cap companies are slightly more diversified than their small-cap peers, which allows many mid-sized companies to generate more consistent revenue and cash flow, along with providing more stable stock prices. Additionally, they are not so big that their size would slow down growth. Long-term data also support the notion that active mid-cap managers have a hard time consistently beating their benchmarks.

DON “weights mid-cap dividend payers by their regular annual cash dividends, which always tethers weights back to a fundamental metric and away from price,” said WisdomTree. “DON added excess return relative to its market cap-weighted S&P MidCap 400 Index benchmark without adding excess risk—as measured by its lower standard deviation, smaller maximum drawdown, down capture of 79% and beta of 0.86.”

“As of this writing, DON is currently trading at 15.2 times forward earnings, which is an 11% discount to the S&P MidCap 400 Index,” according to WisdomTree. “Before 2019, the last time investors saw valuations this inexpensive for DON was in the mini economic slowdown of 2011–2012. Since the end of 2012, the fund has returned just over 12% annualized, about 100 bps higher than the S&P MidCap 400 Index.”