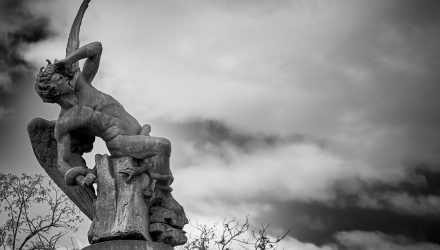 Fallen Angel Field is Getting Bigger, but Not Weighing on Its Biggest ETF

Rather, the largest ETF dedicated to fallen angel debt is up more than 8% over the past week, indicating the fund can absorb new issues coming to market whether those bonds matriculate to its lineup or not.

ANGL seeks to replicate as closely as possible the price and yield performance of the ICE BofAML US Fallen Angel High Yield Index. The index is comprised of below investment grade corporate bonds denominated in U.S. dollars that were rated investment grade at the time of issuance.

“Fitch Ratings expects the U.S. high yield default rate to surpass 4% later this month, the highest level in more than three years, from 2.9% at March 31,” said the rating agency in a recent note.

“The trailing 12-month energy default rate stands at 9.9% following Whiting Petroleum Corp.’s bankruptcy. Fitch projects the 2020 sector default rate to reach 17% by year-end, closing in on the record 19.7% mark set in January 2017,” according to Fitch.

Since these fallen angels were formerly on the cusp of investment-grade status, the group of junk bonds typically has a higher average credit quality than many other speculative-grade debt-related funds. The higher average quality also helped absorb some of the market volatility we experienced last year.

“The high yield universe size increased to a record $1.30 trillion in March, exceeding the previous high of $1.27 trillion in February 2016,” notes Fitch Ratings. “At year-end 2019, the universe stood at $1.16 trillion and has been in a tight range over the past three years. Coronavirus-related fallen angels are driving volume growth. Several sizable issuers were downgraded over the past two months, including Ford Motor Credit, Occidental Petroleum Corp., and Kraft Heinz Foods Co.”