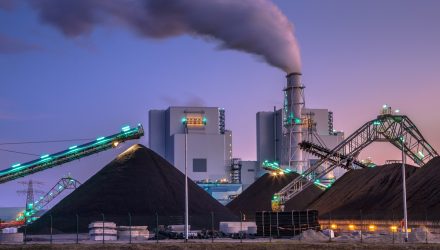 The VanEck Vectors Coal ETF (NYSEArca: KOL) is up nearly 9% this year, lagging broad equity benchmarks, but there is perhaps an under-appreciated element to the coal story.

In recent years, domestic utilities have been reducing use of coal in favor of cheaper, cleaner-burning natural gas. Compounding woes for the U.S. coal industry are the declining costs associated with alternative energy sources, such as solar.

While coal use is declining in the U.S., domestic producers of the commodity are exporting significant amounts of coal to other countries, which could be a tailwind for KOL.

“While coal’s dominance for domestic electricity production is waning, global demand for U.S. coal is increasing; in fact, the U.S. is a net exporter of coal,” said FactSet. “According to the EIA, in 2018 15% of U.S. coal production was exported to other countries, with exports reaching their highest level in five years. The U.S. exports both steam or thermal coal, used to generate electricity, and metallurgical (met) coal, which is used in the steel-making process.”

“Last year, met coal made up 53% of total coal exports and this share is likely to move higher over the next few years,” according to FactSet. “Strong demand from Asian countries for met coal has helped to support higher global prices, encouraging U.S. producers to increase their investments in met coal mining. Coal mined in the Appalachia region is particularly suited for steel production, and with the region’s proximity to coastal export facilities, the producers in this region are well-positioned to boost their export production.”