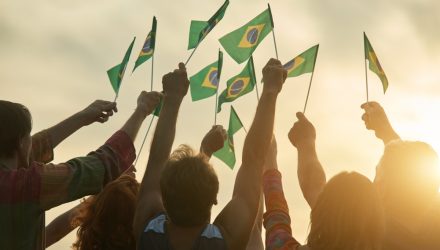 BRF offers targeted exposure to Brazil’s small cap segment, making it a powerful tool that can be used to fine-tune equity portfolios. Given the granularity of this fund, BRF likely has some appeal to long-term investors with a buy-and-hold philosophy, but it is more likely to appeal to those looking to implement a tactical shift or capitalize on perceived mispricings over a relatively short time horizon. However, some might view the product as a more accurate representation of the Brazilian economy instead of the top-heavy– as well as energy and financial heavy– EWZ. Small and mid-caps are thought by many to offer more of a pure-play on national economies, but small caps are likely to offer less stability than their mid-cap brethren but could offer higher returns over the long run. However, this targeted exposure comes at a price as the fund has only about 40 holdings in total, and it has high levels of concentration in some of its top holdings. But for efficient, targeted exposure to Brazil’s small caps, BRF can certainly deliver. The expense ratio on this fund is comparable to other products in the category, and given its focus on small caps, this suggests that the fund is a pretty good value for investors and traders alike.

Brazilian equities have stood out in this week of bloodletting. It’s led to a “pick-and-choose” of global market exposure. Looking at the funds, BRF is up +5.2%, after a 1-week return, and +3.9% for 1-month. So what’s going on?

Brazilian markets are strengthening on a steady economic recovery. Brazilian real currency has hit a 1-month high. Brazil PMIs show economic activity in August that’s the strongest since 2013. IHS Markit’s Brazil services purchasing managers index (PMI) rose to 49.5 in August from 42.5 in July. The composite PMI encompassing manufacturing rose to 53.9 from 47.3. Now, there are reports of a steady resumption of market activities and some firming of demand

Brazil’s government presented to congress a constitutional reform bill aimed at simplifying and reducing the cost of its public sector. Some argue that it is too bloated and a major reason why the public finances are in such poor shape.

Caio Mario Paes de Andrade, special secretary for deregulation at the economy ministry, said it marks a “profound transformation of the state” and will improve the quality and efficiency of the public sector.

As for whether the economy may have bottomed, figures showed that Brazil’s economy shrank by a record 9.7% in the second quarter, with almost all sectors of the economy posting historic declines. Central bank president Roberto Campos Neto said on Wednesday he expects the economy to contract by around 5% this year and rebound by 4% or more next year. From the market’s point of view, it is of symbolic importance

Looking at Brazil’s small caps, it’s important to note that Brazil has the largest economy in Latin America. Small caps may offer greater exposure to domestic growth but has less exposure to global cyclical. Still, Brazil has a vibrant economy with favorable demographics; nearly 40% of the population are under the age of 25

There are still some risks. Ongoing job losses, subdued confidence, and rising costs suggest the services sector are still struggling to regain “meaningful” momentum. Brazil is on course to post a record budget deficit this year due to the emergency spending and lost tax revenue resulting from the COVID-19 pandemic, which has also pushed total government debt to a record high.

Listen to the full podcast episode on BRF ETF: