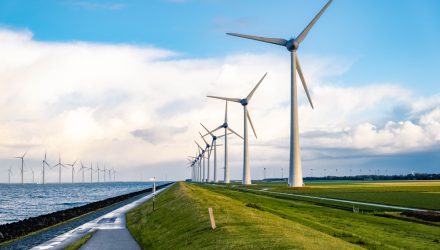 ETF Trends CEO Tom Lydon discussed the ETF of the Week: iShares Global Clean Energy (ICLN) on this week’s “ETF of the Week” podcast with Chuck Jaffe on the MoneyLife Show.

This fund offers a way to invest in the global clean energy index, including both domestic and international stocks in its portfolio. Given the narrow focus, ICLN likely doesn’t deserve a huge weighting in a long-term portfolio, but can be useful as a satellite holding to cover a corner of the market that is often overlooked by broad-based funds. For investors who maintain a long-term bullish outlook on the alternative energy space, this fund can be a nice way to achieve broad-based exposure; ICLN includes companies engaged in various sub-sectors, such as wind power, solar power, and other renewable sources. Those seeking more targeted exposure within the clean energy space have multiple options available for betting on solar power (such as TAN or KWT), nuclear power (URA or NLR), or wind power (FAN or PWND). The portfolio maintained by ICLN is somewhat limited; it has only a few dozen holdings, and some of the components account for big chunks of assets. But that is to be expected given the asset class represented; the number of public alternative energy companies is somewhat limited. Other options providing similar exposure include PBW, PBD, and GEX; a comparison of the expenses, allocation to emerging markets, depth of holdings, and breakdown by sub-sector will help to determine which fund is right for their objectives and risk tolerance.

A Refocus On Clean Energy

Europe’s coronavirus response package included increased funding for climate-related endeavors. Green industries and related sectors have benefited from the European Union’s ambitious plans to end harmful emissions that damage the environment by 2050, which is also part of the bloc’s latest economic recovery plan, allocating 30% of coronavirus recovery funding toward climate-related projects where all spending must comply with its goal of net-zero greenhouse-gas emissions.

Fund managers and market observers believe the push to clean up Europe’s economy will inevitably lead to hundreds of billions of euros invested in renewable fuels, energy infrastructure, transportation, and construction over the next three decades. This isn’t a makes you feel good type of investment, but secular demand tailwinds that will create a global shift toward clean energy.

Analysts at Goldman Sachs Group Inc. calculate that a green deal will require €7 trillion in public and private investment by 2050, with €3 trillion going to utilities, building out renewable-energy production, upgrading power networks, and fitting gas plants with carbon-capture technology. The analysts project earnings per share for European utilities will increase 7% per year through 2050.

The upcoming presidential election is seen as a major inflection point for green investing and climate action. Former Vice President Biden pledged to spend $2 trillion to combat climate change in a bid to eliminate carbon emissions from the power grid by 2035 and accelerate the proliferation of electric vehicles. Consequently, the low-carbon energy industry, such as solar and wind power, and electric-vehicle companies, would benefit the most.

However, if President Donald Trump is re-elected, we may see further deregulation in traditional fossil fuel sectors. Trump has voiced support for the coal industry and rolled back a series of environmental regulations such as the Clean Air Act and the Clean Power Plan. The Trump administration also approved Arctic oil drilling in a wildlife refuge.

Listen to the full podcast episode on ICLN ETF: