You are at:Home»Beyond Basic Beta Channel»Esports ETFs Heat Up As E3 Conference Approaches 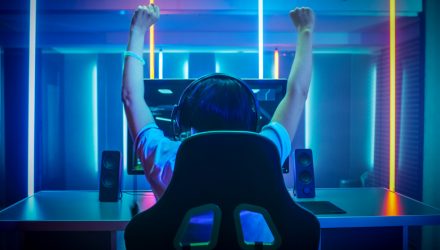 The world of competitive video gaming or esports is a fast-growing international phenomenon with millions of fans and billions of dollars of investor inflows. Streaming services and live events have turned occasional gamers into high profile stars who can sometimes rake in seven-figure earnings and massive brand endorsements.

While there’s a lot of capital flowing into esports, it’s still difficult to say how profitable the whole endeavor is at the moment. One thing that is clear however is that the audience is there. Companies like Twitch, YouTube, and ESPN shell out millions of dollars just to win the rights to air these events.

The gaming industry is currently preparing for its biggest event of the year, the Electronic Entertainment Expo, known as E3 for short, which will commence on Tuesday, and feature games, products and announcements from the most well-known names in the video game space. Research firm Newzoo estimates the event will be worth almost $150 billion in 2019.

One ETF company is capitalizing on the esports movement, having created an ETF that offers investors a way to game the esports universe. The VanEck Video Gaming and Esports ETF (ESPO) launched last October, and the ETF is outperforming the market this year, up 23% compared to the S&P 500′s 15% rally.

A second esports-centered ETF was also launched last Tuesday, the Roundhill BITKRAFT Esports & Digital Entertainment ETF (NERD). Unlike ESPO, NERD has a more diverse universe of company holdings, comprised  of a variety of publishers, streaming network operator and hardware companies, more than half of which are from Asia; a hub for esports industry is located in that region.