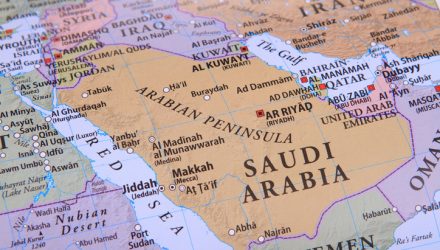 While the rest of the market was stuck in sideways action, energy sector-related exchange traded funds led the charge Monday on rising oil prices in response to Saudi Arabia energy minister’s confirmation that there will be no major change to the kingdom’s oil policy.

The new Saudi energy minister, Prince Abdulaziz bin Salman, confirmed market expectations that there will be no changes in the country’s oil policy, committing to the current output cuts as a way to stabilize prices, Reuters reports.

“The move is bullish for oil prices,” Phil Flynn, an analyst at Price Futures Group, said in a note. “Prince Abdulaziz bin Salman is known as an oil production cutter. He has been instrumental in securing production cuts in the past.”

Prince Abdulaziz said Saudi Arabia’s main policy would not change and it will maintain the global deal to cut oil production by 1.2 million barrels per day. The oil carter has been cutting production in an attempt to ease a global oil glut that has pressured crude prices. He also added that the so-called OPEC+ alliance between OPEC and non-member countries like Russia will continue their partnership for a long time.

“I expect no deviation from Saudi policy. If anything, maybe more of a push in the direction of getting inventories down and getting the market into shape for the (Aramco) IPO,” Robert Ryan, Chief Energy Strategist at BCA research, told Reuters.

Oil prices also found support from data on rising oil imports in China over August. Shipments to the world’s biggest importer increased 3% from July and nearly 10% higher over the first eight months of 2019 year-over-year.