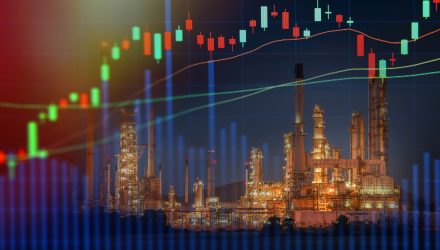 It was a case of now you see it and now you don’t for oil traders this week as the Energy Information Administration on Thursday reported that U.S. crude supplies declined by 4.8 million barrels for the week ended Aug. 30. Before this data was released, the American Petroleum Institute on Wednesday reported an increase of 401,000 barrels.

“API report has been proven to be a head-fake,” said Matt Smith, director of commodity research at ClipperData. “The EIA has reported a solid draw to crude stocks, with refining activity at a similar pace to last week, production dipping slightly, and exports holding above 3 million barrels per day for a second week—a hat-tip to Permian pipelines,”

Highlights from the report:

Traders looking to make a play on oil can look to leveraged exchange-traded funds (ETFs). Whether they’re bullish or bearish on the commodity or the energy sector, traders have a plethora of options.