You are at:Home»Beyond Basic Beta Channel»Dow Climbs Over 200 Points as Recession Fears Ease 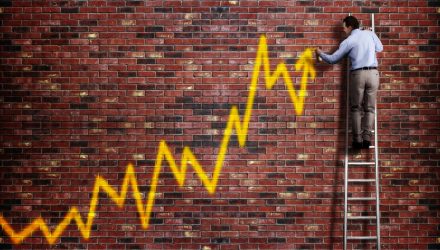 An inverted yield curve has been the cause of much angst the past week in the capital markets, but on Tuesday, the bond market stabilized, allaying fears of a recession and helping the Dow Jones Industrial Average climb over 200 points.

The pair consisting of the short-term 3-month Treasury yield and the long-term 10-year yield have been the prime focus the past week. On Tuesday, the 3-month note eased off its upward ascent while the 10-year yield climbed, decreasing the steepness of the inversion.

The spread between the 3-month and 10-year notes fell below 10 basis points for the first time in over a decade. This strong recession indicator contrasted a more upbeat central bank, but investors were quick to sense the cautiousness.

Global Slowdown Still on Their Minds

However, the wall of worry still had fears of a global economic slowdown, particularly after last week when Federal Reserve Chairman Jerome Powell said that “we’ve noted some developments at home and around the world that bear our close attention.”

“Expectations are for a pretty weak first quarter overseas to go along with a fairly weak U.S.,” said Sam Stovall, chief investment strategist at CFRA Research. “The real question is whether it’s just a weak first quarter and then it recovers. Our expectation right now is that it is more of a soft landing.”

“I think we’re just going through a pretty healthy digestion of gains,” said Stovall. “Q1 softness will probably be followed by a recovery in Q2, both on an economic perspective as well as an earnings outlook. I would tell investors you are probably better off buying than you are bailing.”