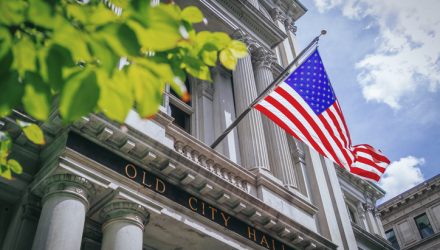 Demand for Muni Bond ETFs Is on the Rise

Municipal bonds and related ETFs have been riding on high momentum, strengthening on a broad surge in demand for attractively yielding debt and dip in borrowing by state and local governments.

Over the first six months of 2019, investors funneled a net $47 billion into muni bond funds, a record for the first two quarters, the Wall Street Journal reports.

Munis have been an attractive play for fixed-income investors this year as bonds provided positive returns, including price changes and interest, on the Bloomberg Barclays Municipal Bond Index every month since November 2018, the longest streak since the summer of 2016.

Meanwhile, the pick-up in demand has been meet by a decline in debt sales out of states and municipalities after provisions of the 2017 tax overhaul limited alternatives for refinancing. Additionally, recent economic strength helped state and local governments retain more cash, diminishing their need to borrow and diminishing the already low-risk of defaults.

“There are not many munis around,” Guy Davidson, the chief investment officer of AllianceBernstein LP’s municipal business, told the WSJ. Strong balance sheets mean “the downside is pretty limited at the moment.”

The prospects of a Federal Reserve interest rate cut as early as later this month has also fueled the bull rally in the fixed-income market, with benchmark 10-year Treasury bond yields dipping below 2% this year. The yield on the Bloomberg Barclays Municipal Bond Index also stood earlier this week at 1.95%, its lowest level since October 2016, compared to a recent peak of 3.08% in November.

“It’s really just amazing how aggressive this market is,” Matt Fabian, a partner at Municipal Market Analytics, told the WSJ. “They want tax-exempt income, and you can’t get that anywhere else except for the muni market.”