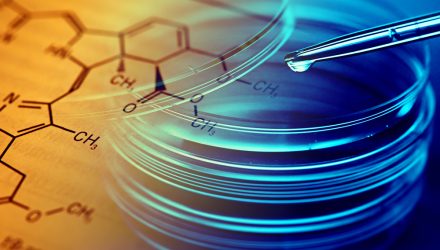 Eight months into 2022, it’s fair to say that it’s been a tepid year of deal-making in the biotechnology industry, and that’s one reason why the related stocks and exchange traded funds are scuffling.

Still, hope burns eternal, with some market observers speculating that biotech consolidation is poised to ramp up, potentially benefiting ETFs such as the VanEck Vectors Biotech ETF (BBH). In August, Pfizer (NYSE:PFE) said that it would acquire Global Blood Therapeutics (GBT), which some analysts believe could set the stage for more biotech mergers and acquisitions activity.

While BBH is home to just 25 stocks, the ETF’s lineup is diverse enough that it’s home to both likely buyers and potential targets in the biotech consolidation scene. Patient investors could gain the benefit of some favorable seasonality with the arrival of the often-ballyhooed JPMorgan Healthcare Conference, which takes place in January.

“I think it’s a really important data point that we’ve had a bunch of positive clinical data sets, a bunch of financings, a bunch of good news and I do think we are headed higher into the end of the year and into 2023,” said Jefferies biotech analyst Michael Yee in an interview with CNBC last Friday.

The Jefferies analyst also sees a runway for elevated mergers and acquisitions, which is often one of the primary reasons why some investors embrace ETFs such as BBH.

“You have had a bunch of deals in the past two months, Pfizer being particularly aggressive in the space, deploying a lot of their Covid money across the space, got everybody excited,” according to Yee.

It’s also worth noting that some market observers believe that biotech and pharmaceuticals stocks, including some members of the BBH portfolio, may not be as vulnerable as previously expected to the drug pricing reduction provisions featured in the recently enacted Inflation Reduction Act. That’s relevant because that legislation is one of the primary reasons why BBH and friends sagged in recent weeks.

“We think people digested that, we think people are comfortable with that,” Yee said. “You look at where stocks and valuations are, basically five to six year lows on valuation. People are willing to forgo that, particularly in this macro, recessionary environment, there’s not a lot of concern about that.”

Some analysts acknowledge that the Medicare drug price negotiations will have an impact on biotech and pharma companies, but it will be manageable over the long term.