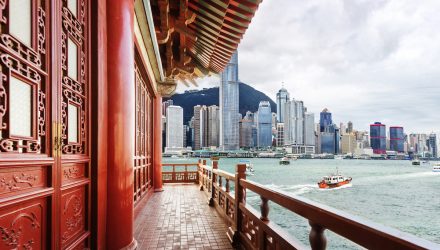 The iShares MSCI China ETF (NasdaqGM: MCHI), one of the largest US-listed exchange traded funds dedicated to Chinese equities, is higher by more than 20% this year, but some market observers believe Chinese equities have the potential to deliver more upside as the second quarter moves along.

Easing trade tensions between the U.S. and China, the world’s two largest economies, are bolstering the fortunes of Chinese stocks and ETFs such as FXI and MCHI this year and some market observers believe Chinese stocks can continue rallying.

“China has moved to easier credit and fiscal policies, but with greater caution than in the 2015-2016 downturn,” said BlackRock in a recent note. “The supportive stance of global policymakers should underpin both equities and bonds.”

“China plays a pivotal role in our views on the global economy, markets and geopolitics,” said BlackRock. “We are increasingly confident that Chinese growth is likely to reaccelerate from the second quarter onward, thanks to easing fiscal and monetary policies.”

The $4.58 billion MCHI tracks the MSCI China Index and holds 310 stocks. The fund allocates almost half its weight to the communication services and financial services sectors. MCHI has a weight of nearly 22% to consumer discretionary stocks, giving the fund some exposure to the booming China consumer theme.

“Improving Chinese activity should benefit global growth, especially in Asia and Europe, and could also boost global capex. We see potential for a U.S.-China trade deal to address the bilateral trade gap and market access, but caution that U.S.-China tensions, particularly over tech dominance, are likely here to stay,” according to BlackRock.