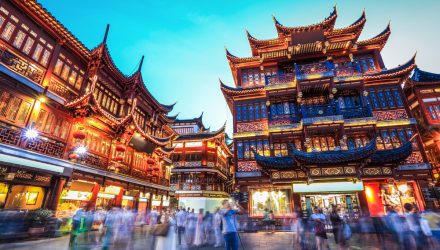 China country-specific ETFs made a strong rebound Tuesday after the People’s Bank of China injected billions of dollars into the financial system in an attempt to offset the potential slowdown in light of a spreading coronavirus outbreak.

As the death toll from the virus outbreak rose over 420 and the spreading contagion risks affecting the economy, China’s central bank has pumped 1.7 trillion yuan, or $242.74 billion, into its financial system through open market operations and could be contemplating lowering its key lending rate and its reserve requirement ratios in a bid to restore investment confidence, Reuters reports.

Looking ahead, China’s stability-obsessed leaders could further add on more spending, tax relief and subsidies for virus-hit sectors, along with the further monetary easing to push for more bank lending and lower borrowing costs for businesses, according to the policy insiders.

“We have policy reserves and will step up policy support for the economy. The most urgent task is to put the virus outbreak under control,” a source who advises the government told Reuters.

Specifically, the anonymous source told Reuters that support measures will concentrate on retail, catering, logistics, transportation and tourism sectors, which have been weighed down by the viral outbreak and remain vulnerable to job losses in light of the spreading virus.

China’s economy has been ground to a halt as the Lunar New Year holiday has been extended by 10 days in many industrial areas of the emerging country, with Beijing suggesting companies to hold off normal operations. Meanwhile, transportation networks have cut down to spread the disease.

“It’s necessary to step up policy support for the economy but we don’t need to use strong stimulus at this stage,” one of the policy insiders said.

Nevertheless, market observers warn that the impediments to the economy could drag down growth well below an adjusted 6% target.

“It’s hard to see a turning point in the outbreak. First-quarter GDP growth could dip below 5% and the impact may persist in the second quarter,” Wang Jun, chief economist at Zhongyuan Bank, told Reuters.