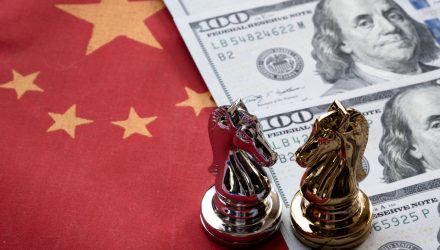 China country-specific exchange traded funds receive a pommeling, with China A-shares experiencing their worst session in over three years, Monday after President Donald Trump tweeted he would raise tariffs this week, raisin concerns that trade negotiations between Washington and Beijing were falling out.

The blue-chip CSI300 Index and the Shanghai Composite Index both retreated over 5%, posting their worst single-day dip since February 2016, while over 1,000 mainland company stocks hit their maximum daily 10% limit declines, Reuters reports.

Markets plunged after President Trump over the weekend threatened to raise tariffs on $200 billion of Chinese goods from 10% to 25% at the end of the week and targeted hundreds of billions more soon, attributing the sudden amp up in tariff threats to negotiators dragging their feet.

Sentiment, though, somewhat stabilized after China said its trade delegation is prepping to go to the U.S.

Many market participants had originally priced in a trade according as a done deal, but the sudden escalation in rhetoric could raise the prospect of a collapse in talks that would further pressure the global economy.

“The market is re-pricing the situation, as investors had thought trade negotiations were coming to an end,” Ken Cheung, senior Asian FX strategist at Mizuho Bank, told Reuters. “If the trade war reignites, some market participants may speculate about renewed yuan depreciation to counteract the negative impact from rising tariffs.”