You are at:Home»Beyond Basic Beta Channel»China Currency Weakens: Another Step Towards Decoupling 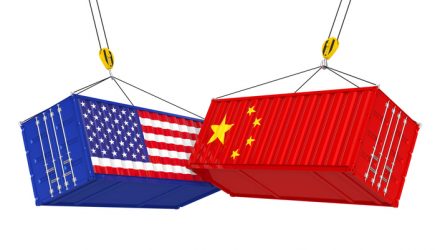 China halted U.S. agricultural imports and let the currency weaken beyond 7/U.S. dollar, giving more credence to the “decoupling” narrative. The only two major emerging markets currencies that escaped the morning carnage were the Russian ruble and the Turkish lira.

U.S.-China trade tensions reached a new level following China’s decision to halt U.S. agricultural imports and China’s central bank (PBoC) allowing the currency to weaken beyond 7/U.S. dollar—for the first time since 2008 (see chart below). With the onshore renminbi trading at 7.052 and offshore renminbi at 7.097 vs. U.S. dollar this morning (according to Bloomberg LP, as of 10:12 a.m. ET), President Donald Trump duly accused China of currency manipulation, even though (1) the fundamental support for the renminbi weakened on the back of new tariffs and slower growth, and (2) the PBoC said it will not be using the currency as a tool in the trade dispute and that it can appreciate back (plus, a large renminbi depreciation could be destabilizing internally). The continuation of social unrest in Hong Kong also drew attention to risks associated with the Hong Kong dollar peg—despite the fact that Hong Kong’s international reserves appear sufficient (USD445.6B, excluding gold). The situation remains extremely fluid, but for now markets are in a major risk-off mode as China is perceived to have made yet another step towards decoupling from the U.S.

The only two major emerging markets currencies that escaped this morning’s carnage were the Russian ruble and the Turkish lira. The main reason in Russia is that—according to the clarification from the Office of Foreign Assets Control of the U.S. Treasury Department—the new round of U.S. sanctions will not affect local currency government bonds (OFZ) and Russia’s state-controlled companies. U.S. banks will still be prohibited from buying non-ruble denominated sovereign bonds on the primary market. But the worst-possible scenario has been avoided for now.

Currency interventions is a big factor behind the Turkish lira’s performance this morning. The central bank also announced that it would be ready to offer longer-term currency swaps against the lira as a means to prop it up if necessary. So, even though July’s headline inflation surprised to the downside today—rising less than expected despite a one-off increase in regulated prices—this was not the reason for the currency’s outperformance.

Chart at a Glance: Chinese Currency Moves Beyond Critical Level 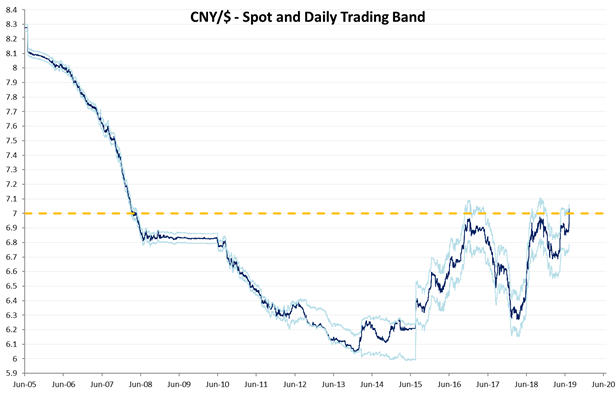 The information presented does not involve the rendering of personalized investment, financial, legal, or tax advice. This is not an offer to buy or sell, or a solicitation of any offer to buy or sell any of the securities mentioned herein. Certain statements contained herein may constitute projections, forecasts and other forward looking statements, which do not reflect actual results. Certain information may be provided by third-party sources and, although believed to be reliable, it has not been independently verified and its accuracy or completeness cannot be guaranteed. Any opinions, projections, forecasts, and forward-looking statements presented herein are valid as the date of this communication and are subject to change.

All investing is subject to risk, including the possible loss of the money you invest. As with any investment strategy, there is no guarantee that investment objectives will be met and investors may lose money. Diversification does not ensure a profit or protect against a loss in a declining market. Past performance is no guarantee of future performance.