You are at:Home»Beyond Basic Beta Channel»Check Out this ETF as Economic Growth Prospects Improve for Russia 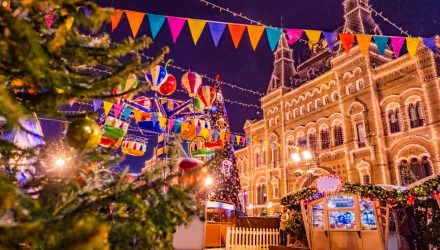 Check Out this ETF as Economic Growth Prospects Improve for Russia

Russia wasn’t immune to the effects of the Covid-19 pandemic as most of the world succumbed to the economic ramifications. However, Russian economists are predicting that growth prospects will be better than expected.

“The Economy Ministry is now predicting GDP will fall by 3.9% in 2020, up from its previous forecast of a 5% contraction, Kommersant reported Monday,” a Moscow Times report noted. “Russia’s economy has not taken as big a hit from the pandemic as other European economies, recording a contraction of 8.5% in the second quarter of the year, according to official statistics. That compares to a fall of more than 20% in the U.K, and double-digit declines in all of Europe’s major economies.”

“The more moderate hit to Russia’s economy is likely due to a shorter and ‘softer’ lockdown, and the lower share of consumer services in Russia’s consumption,” Evghenia Sleptsova, Oxford Economics’ senior emerging markets economist wrote.

Before exchange-traded fund (ETF) investors dive into Russia-focused funds, they should still be aware of some challenges ahead. For the most part, Covid-19 still remains a wild card for the Russian economy.

“Despite a string of upgrades from both official and independent forecasters, there is still a high degree of uncertainty over where the Russian economy will head over the next few months,” the Moscow Times report added. “Economists say the recent uptick in activity could be a short-lived post-quarantine spurt which may fizzle out once the longer-term effects of cuts to wages and investment start to be felt throughout the economy. Meanwhile the prospect of a second wave and another partial economic shutdown remain the biggest risks to the recovery.”

That being said, here are a pair of other funds to consider to get Russia exposure: