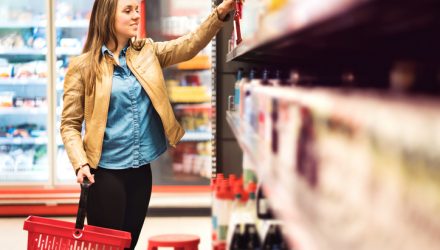 The VanEck Vectors Retail ETF (NYSEArca: RTH) is up more than 20% year-to-date and that bullishness is being supported by the exchange traded fund’s large weight to e-commerce giant Amazon.com Inc. (NASDAQ: AMZN). That stock accounts for more than 20% of RTH’s roster.

RTH has one of the largest weights to that stock among all US-listed ETFs. Dow components Home Depot (NYSE: HD) and Walmart Inc. (NYSE: WMT) combine for over 20% of RTH’s roster. Those are two of the stronger names in the Dow Jones Industrial Average this year. However, Amazon is likely to remain the main driver of RTH’s fortunes and that could be a positive.

“As a starting point, we believe Amazon has been undergoing a strategic shift the past several years on two fronts,” said Morningstar in a recent note. “The first is shifting away from a first-party marketplace where Amazon directly sells products to consumers, to more of a third-party platform where vendors sell products and Amazon takes a commission from the sale. This is important not only because this is a higher-margin transaction from Amazon, but also it unlocks additional services that Amazon can offer its vendors.”

The research firm has a $2,300 fair value estimate on Amazon.

Many say that “retail is dead” as the slump for companies that are more firmly in the bricks-and-mortar space doesn’t appear to be letting up anytime soon. Nevertheless, we have witnessed increased opportunity in online retail or e-commerce stocks and ETFs.

“The Census Bureau of the Department of Commerce announced (in May) that the estimate of U.S. retail e-commerce sales for the first quarter of 2019, adjusted for seasonal variation, but not for price changes, was $137.7 billion, an increase of 3.6percent (±0.7%) from the fourth quarter of 2018,” said the Census Bureau.

Amazon’s Prime Day is looming and that could be another catalyst for RTH.

“As it pertains to Prime Day, Amazon is planning new collaborations with several new key apparel vendors and has noted that small- and medium-sized vendors sold more than $1.5 billion worth of products on Prime Day last year, a figure that we expect the company to easily surpass in 2019,” according to Morningstar.