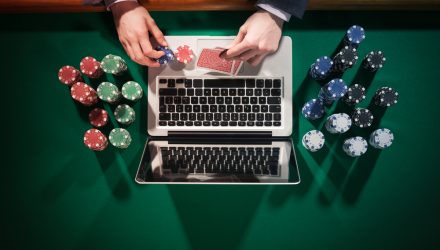 Back BJK for the Future of Betting

There was a time when the legitimate betting industry centered almost exclusively around brick-and-mortar casinos, but times are changing, and those changes are ushering in some unique opportunities for long-term investors.

Among exchange traded funds, the VanEck Vectors Gaming ETF (BJK) is one of the premier avenues with which to play the evolution of the regulated betting industry. While the blush has come off of many of the related stocks in recent months, the future of gaming is online and in sports. That much has been on display since the 2018 Supreme Court decision on the Professional and Amateur Sports Protection Act (PASPA).

BJK is home to 39 stocks, including dedicated operators of daily fantasy sports (DFS) and online sports betting (OSB) as well as traditional land-based casino operators and some companies that check both boxes. That’s relevant because there is a debate regarding whether online gambling offerings are helpful or harmful to standard casinos.

“An on again off again debate in the gaming sector remains whether online gambling proves largely additive to growth, or cannibalistic to legacy land-based play. For several years, early-mover NJ was pointed to as evidence supporting online potentially proving vastly additive (counter argument: NJ is more regional-destination in orientation). However more recently, states with full-scale online offerings appear to be lagging behind the broader U.S. through the recovery. States with solely OSB appear to be pacing inline,” according to Stifel research.

Thanks to the ongoing evolution of internet casinos and OSB, there’s now disruption to be had in the gaming industry. Disruptors in the space include DraftKings (NASDAQ:DKNG) and U.K.-based Flutter Entertainment, the parent company of FanDuel.

“DraftKings is well-funded, and boasts a cost of capital advantage (though contracting more recently), both of which are leveraged to compete via aggressive marketing spend,” adds Stifel. “Early top-line market share results suggest the strategy is working, though the odds of success for a planned rationalization of marketing spend and inflection to profitability remains a key debate today. Regardless, DraftKings remains a key player and the poster child for an online pure-play B2C disruptor.”

Another factor to consider is industry consolidation, which is expected to ramp up this year. Several BJK holdings have been active acquirers, while at least two — Entain and Playtech — have been targets in large deals that ultimately fell apart.