You are at:Home»Beyond Basic Beta Channel»As Egypt (Literally) Rights the Ship, Look to the EGPT ETF 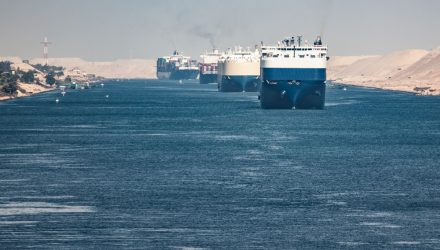 As Egypt (Literally) Rights the Ship, Look to the EGPT ETF

The reopening phase of global economic healing is well underway, and Egypt could be a major beneficiary. As tourism returns, the VanEck Vectors Egypt Index ETF (EGPT) could also start seeing big gains.

“The Egyptian economy is expected to grow by 6 percent in the fiscal year 2021-2022, and the real GDP will grow by 3 percent during the current fiscal year, the Ministry of Planning and Economic Development said on Friday in a statement,” a Xinhuanet.com report noted.

“The recovery of tourism in Egypt and revenues of the Suez Canal will lead to an increase in economic growth up to 6 percent in the fiscal year 2021-2022,” the Ministry said.

EGPT seeks to replicate the MVIS® Egypt Index. The index includes securities of Egyptian companies that include small caps- and mid-caps.

A company is generally considered to be an Egyptian company if it is incorporated in Egypt or is incorporated outside Egypt but has at least 50% of its revenues/related assets in Egypt. EGPT gives investors access to:

A Setback in the Suez Canal

As a Wall Street Journal report said, “300 ships are waiting on either side of the canal. Shippers and insurance companies face billions of dollars in losses. Mr. Sisi, as a result, is coming under immense pressure to unblock the canal as soon as possible, or risk Egypt’s future shipping traffic as cheaper oil prices make a longer journey around southern Africa more affordable.”

However, those at the helm of righting the ship, literally and figuratively, aren’t panicking. The hope, of course, is that once this crisis gets resolved, things will move forward for Egypt and its economy.

“They really need to paint that we are efficient, we will take care of it,” said Ahmed Darwish, a former cabinet minister and chairman of the Suez Canal Economic Zone under Mr. Sisi.

“I think the damage is more a marketing damage than true financial damage,” he added.