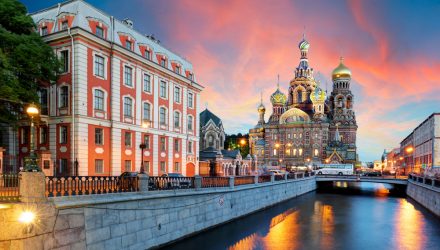 A Surprising Emerging Market May be Beckoning

With emerging markets stocks under pressure and oil price swooning due to the novel coronavirus, Russian equities and the VanEck Vectors Russia ETF (CBOE: RSX) may not be the destinations investors are thinking of right, but this market may offer more opportunity than initially meets the eye.

“Russia’s stock market is forecast to surpass record levels reached in January by the end of this year, but concerns over the effects of China’s coronavirus epidemic are causing uncertainty,” according to a recent Reuters poll.

bolstering the case of RSX and taking some of the volatility edges off of owning Russian stocks is the market’s status as a dividend destination. Russia is one of the largest emerging markets dividend payers and RSX yields almost 5.50%, nearly double the yield found on the MSCI Emerging Markets Index.

History isn’t guaranteed to repeat, but Russia was one of the best-performing equity markets among developing economies last year.

“Russia’s rouble-denominated MOEX index. IMPEX was among the best global performers in 2019 as central bank rate cuts and increasingly high dividend payments by Russian companies drew buyers into Russian equities,” according to Reuters.

Historically, Russia is inexpensive compared to other developing economies and that remains the case this year.

“The MOEX is still seen recovering and peaking at the end of 2020, while gains in the dollar-based RTS index. IRTS is expected to continue into 2021, a consensus forecast of 13 analysts showed,” notes the Reuters poll. “Unlike in previous polls, some analysts refrained from long-term forecasts in the February poll amid the virus-related uncertainty.”

Related: A Pleasant Surprise Among Emerging Markets ETFs in 2019

Many of RSX’s largest components are state-controlled energy companies that Moscow leans on to boost payouts. Additionally, Russian banks are showing dividend growth potential of their own.

“The MOEX hit a record high of 3,226.9 on Jan. 20 and is forecast to gain around 7.8% by the end of this year from 3,002.68 on Feb. 25, reaching 3,237. Forecasts in the poll, which was conducted in the second half of February, ranged from 2,600 to 3,650,” according to Reuters. “Dmitry Donetsky, the equity analyst at Solid Investment, said the likelihood of a correction in global stocks in 2020 was substantial, but that Russia would be impervious to the worst of that decline.”