You are at:Home»Beyond Basic Beta Channel»A Pleasant Surprise Among Emerging Markets ETFs in 2019 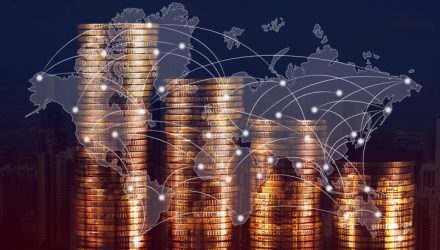 A Pleasant Surprise Among Emerging Markets ETFs in 2019

Among emerging markets ETFs in 2019, the VanEck Vectors Russia ETF (CBOE: RSX) has been a pleasant surprise, outpacing the MSCI Emerging Markets index by a 3-to-1 margin while more than keeping pace with S&P 500.

RSX, the largest US-listed Russia ETF, lost 4.81% on Monday, paring its 2019 gains, but the fund may offer more upside for investors next year. RSX follows the MVIS Russia Index, “which includes publicly traded companies that are incorporated in Russia or that are incorporated outside of Russia but has at least 50% of their revenues/related assets in Russia,” according to VanEck.

“The ruble-based MOEX Russia Index has surged over 27 percent so far this year, while the dollar-denominated RTS was up over 40 percent. Russian equities have outpaced most other emerging market stocks and kept pace with the S&P 500, an index of the top 500 US corporations,” reports RT News.

While Russian stocks are usually more volatile than broader emerging markets benchmarks, investors are compensated for that risk with low valuations and above-average dividend yields.

Many of RSX’s largest components are state-controlled energy companies that Moscow leans on to boost payouts. Additionally, Russian banks are showing dividend growth potential of their own. The financial services sector accounts for 11.7% of RSX’s weight.

“The stock market’s current surge has been driven by higher global risk appetite and a search for higher-paying assets amid interest rate cuts, according to Mikhail Ganelin, senior analyst at Aton. He said that it has benefited Russian stocks, which are seen as riskier and have lower levels of liquidity,” reports RT News.

RSX’s rally has come against the backdrop of economic sanctions by the U.S., which could slow the Russian economy next year.

“Russia’s economic growth is expected to climb to 1.7 percent in 2020, which will trail most other major emerging markets. The ruble has risen almost 11 percent against the US dollar in 2019, even as most other emerging-market currencies weakened,” according to RT.

Investors have added nearly $16.1 million to RSX since the start of the fourth quarter.