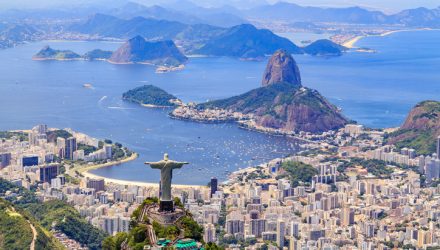 A Mass Exodus From the Brazil ETF

“Investors pulled about $127 million from the $9 billion iShares MSCI Brazil ETF on Tuesday, the largest single-day withdrawal since August, as traders assessed the recent escalation in global trade tensions and mounting signs of disappointing growth in Brazil,” reports Bloomberg.

Brazilian stocks are expected to strengthen on the slowdown in U.S. Federal Reserve rate hikes, which is also expected to boost broader emerging markets as the U.S. dollar loses its support. Brazil’s market is also expected to benefit from a privatization and deregulation under the Jair Bolsonaro administration.

“It was the second day of withdrawals for the EWZ, as the fund is known, signaling an adjustment after its first gain for the month of May — traditionally bad for emerging markets — since 2009,” according to Bloomberg.

However, the pension effort has been slower-moving than many investors would like and may end being watered down as it makes its way through Brazil’s congress.

“Aberdeen Asset Management Plc’s Peter Taylor said that while recent developments in the domestic scenario have been slightly positive, he needs more clarity on the pension overhaul’s approval to add to his small overweight in Brazil stocks,” reports Bloomberg.

Although EWZ has traded higher over the past month, investors have been pulling money from Brazil ETFs.

“Investors pulled $313 million from five U.S. listed ETFs dedicated to Brazilian assets over the past week, the second-largest net outflow among emerging markets. Chinese ETFs, which topped losses, suffered a $466 million net outflow in the same span,” according to Bloomberg.