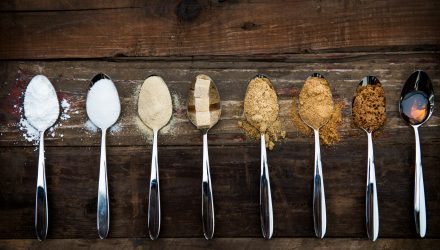 Sugar ETPs Bounce as Traders Look to an Oversold Market

Sugar prices have plunged this year as a global supply glut weighed on markets, but sugar-related exchange traded products began to strengthen as traders looked to what could be an oversold market.

On Friday, the sugar related exchange traded note and ETF, iPath Series B Bloomberg Sugar Subindex Total Return ETN (NYSEArca: SGGB) and Teucrium Sugar Fund (NYSEArca: CANE), gained 2.1% and 1.9%, respectively, after briefly trading in oversold territory as indicated by their relative strength index earlier this week. ICE Sugar #11 futures have plunged 29.2% year-to-date to $1.085 per pound, with CANE down 29.9% so far this year.

Dealers said markets were still technically oversold on Friday, which helped to discourage selling and further supported chart-driven buying activity – sugar contracts formed a reversal bottom on its daily chart and was close to the 2015 low on the monthly chart, signalling a major low. They also noted that sentiment strengthened this week after the October contract’s deep discount to the March contract attracted demand from refiners, contributing to a sudden narrowing in the spread.

The strengthening demand from refiners was a supportive factor, but dealers remained cautious on the price outlook as the global supply glut is an ongoing concern.

“The more immediate worry though is just how much sugar traders and refiners are willing to take on at these prices and spreads,” Tobin Gorey of the Commonwealth Bank of Australia said in a market note. “Sugar inventories will swell mightily into 2019.”

According to analysts, the world sugar balance sheet is set for a surplus of a higher-than-previously expected 10.8 million metric tons in the current 2017/18 season, Reuters reports. Additionally, a second consecutive season of excess output is forecasted for the 2018/19 season, with the surplus forecast at higher 6 million metric tons.

For more information on the sugar market, visit our sugar category.