You are at:Home»Equity ETFs»Strong & Sturdy: Steel ETF Ready to Surge 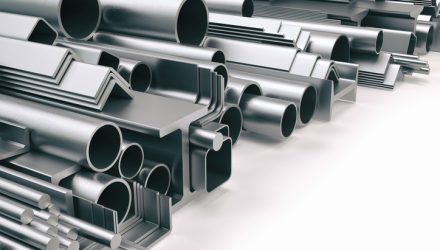 The VanEck Vectors Steel ETF (NYSEArca: SLX) is up about 15% year-to-date and resides just 3% below its recent highs, but has been mostly flat in recent weeks. SLX’s recently lethargic performance is not stopping some technical analysts from presenting bullish forecasts on the lone steel exchange traded fund.

“Investors can see that the Steel ETF (SLX) remains inside its rising trend channel. As long as this remains the case, it’s bullish. But there’s more,” according to ETF Daily News. “A big test is looming for steel bulls. SLX is now testing this year’s price highs. “This “breakout test” is particularly important because it comes as steel prices (SLX) are straddling the lower side of the rising trend channel.”

Related: Where to Look for Value in Steel ETFs