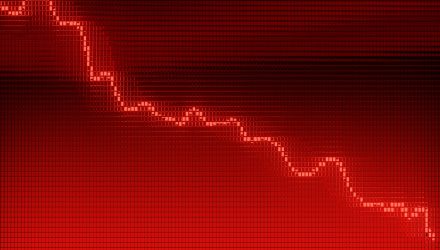 The second case of coronavirus was confirmed Friday in the United States, tanking stocks and exploding volatility, as China’s efforts to control its spread was expanded on all sides. Travel bans were extended in central China to lock-down tens of millions of people as markets sold off in fear of global contagion.

In Wuhan, where the virus was first identified, workers are scrambling to erect a 1,000-bed hospital to treat victims of the disease.

The Dow Jones Industrial Average has traded down nearly 1% as of 2 PM. EST and is steadily sinking, after climbing more than 100 points earlier in the day. The S&P 500 is off 1.3% and dropping as well, while. the Nasdaq Composite is following down the most at 1.35%.

On Friday, the Centers for Disease Control and Prevention noted that a Chicago resident who traveled to Wuhan, where the virus originated in December, was diagnosed with the sickness. This is on top of an infected resident of Seattle that was discovered recently.
The flu-like symptoms of the coronavirus, which was first identified late last year, has more than 33 million people now under travel restrictions in China, which could impact jet fuel demand. The timing is especially crucial with the upcoming Chinese New Year commencing tomorrow, representing the world’s largest annual human migration.
“When cities are placed under quarantine, and public transit is shut down, by definition that reduces economic activity and has a negative impact on energy demand, oil included,” Raymond James analyst John Freeman said in a note to clients Friday. “Once there is evidence that the outbreak is contained and thus economic disruption subsiding, sentiment on oil should improve, bringing prices back up.”
There are now over 830 confirmed cases of infection, and at least 26 people have died. A total of 8,420 people are reported to be under observation. Moreover, infections have been confirmed in South Korea, Japan, Nepal, Thailand, Singapore, Vietnam, Taiwan, and the United States, making this a global threat.
The Invesco QQQ Trust (QQQ), which tracks the Nasdaq is off 1.13%, while the SPDR S&P 500 ETF Trust (SPY) is off 1.24%, looking to finish the week down from recent highs just days ago.
For more market news and updates, visit ETFtrends.com.