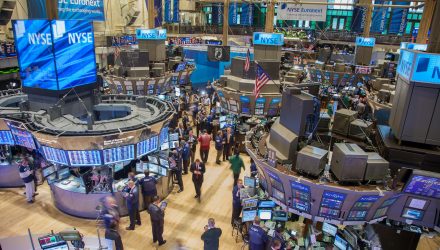 Stocks Ranging Higher After Erasing All Gains Under Trump Wednesday

Stocks are consolidating in a wide range on Thursday, after curbing some of the largest losses from earlier in the day as gains in big-tech shares are helping boost equities after a brutal selloff overnight.

As of nearly 1:30 PM EST, the Dow Jones Industrial Average has rallied almost 220 points higher, or 1.2%, while the S&P 500 is up 1.15% and the Nasdaq Composite outperformed has led the 2 other indices with a 3.3% gain. Shares of tech companies are gaining some traction, with Netflix and Facebook up 6.5% and 7.2%, respectively, and Amazon gaining 4.7%.

Earlier in the session, the Dow was down 721 points, showing over a 3% loss, as the S&P 500 briefly tumbled more than 3% as well, making this a tumultuous market, as volatility continues to dominate.
“This is a day trader’s market,” said Christian Fromhertz, CEO of Tribeca Trade Group. “That’s not my favorite type of trading, but the day-to-day swings and the overnight moves are pretty insane.”
This roller-coaster was on full display Wednesday, as a precipitous market drop completed the process of erasing all the Dow’s gains since President Donald Trump’s inauguration on January 2017, with the S&P 500 widely ranging as much as 4% or more in either direction for the seven consecutive sessions through Tuesday’s close, exceeding the prior record of six days, which harkens back to November 1929, according to LPL Financial.
The velocity of this market drop has led to investors liquidate stocks and unrelated asset classes such as gold to cover margin calls.
“Markets are clearly in a state of panic and forced liquidations – but risks remain skewed to the upside and this should become much more apparent once some of the solvency issues are addressed,” Adam Crisafulli, founder of Vital Knowledge, said in a note.
In the meantime, while the U.S. government works to pass a fiscal stimulus plan, on Wednesday evening, the European Central Bank (ECB) announced a new Pandemic Emergency Purchase Program that will disseminate €750 billion ($819 billion) to buy securities to help bolster the European economy. The central bank noted that purchases will be made until the end of the year and include a variety of assets such as government debt.
For more market trends, visit  ETF Trends.