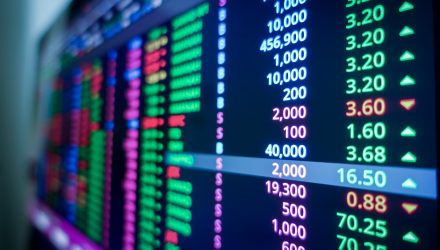 Heading into Easter, U.S. stocks are attempting a second Green Day in a row, making fresh highs once again despite an increasing number of coronavirus deaths and an ongoing battle between President Trump and the World Health Organization.

The coronavirus pandemic has now spread to nearly 1.6 million people, has killed over 91,000, which includes more than 450,000 cases in the United States alone, where more than 16,000 people have died.

President Trump heightened tensions with the WHO on Wednesday, after criticizing the agency’s response to the COVID-19 pandemic again and warning that the White House could prevent necessary funding for the agency.

“So we’re going to do a study, an investigation, and we’re going to make a determination as to what we’re doing. In the meantime, we’re holding back,” Trump said at a White House press conference Wednesday.

U.S. Secretary of State Mike Pompeo said the administration will reassess the WHO’s funding, explaining that the United Nation’s health organization hasn’t “achieved what it intended to do,” notably in response to the coronavirus pandemic.
“Organizations have to work. They have to deliver the outcomes for which they were intended,” Pompeo said. “We need to make sure that, not only the World Health Organization but every international organization that we take taxpayer money and give it to them for the benefit of America, we need to make sure it’s delivering on those taxpayer dollars.”
Despite consistent pushback from the World Health Organization on some of the White House policy changes when asked if WHO Director-General Dr. Tedros Adhanom Ghebreyesus should resign, Pompeo said now “is not the time to be doing that kind of change.”
With the approaching holiday weekend, the stock market seems largely unfazed by the disagreement, with the Dow Jones Industrial Average climbing 2.15%, the S&P 500 rallying 2.19%, and the Nasdaq ascending 1.19% as of 1 PM EST.
Stock Index ETFs are following equity markets higher as well, with the  SPDR S&P 500 ETF Trust (SPY) up 2.38%, the SPDR Dow Jones Industrial Average ETF (DIA) climbing 2.30%, and the Invesco QQQ Trust (QQQ)  up 0.63%.
This move higher would be the second day of gains in a row for the market, which has moved well off the bottom since March 23, where it had fallen more than 35% from the February highs, giving investors pause as to how quickly this bear market will recover.
For more market trends, visit  ETF Trends.