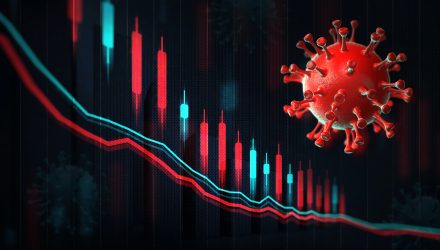 Stocks and index ETFs dropped for a second day in a row on Wednesday, failing to retain earlier gains, after disheartening comments from Treasury Secretary Steven Mnuchin quelled investor enthusiasm for a new coronavirus aid deal being reached.

After dropping on Tuesday, to culminate four days of consecutive gains, the Dow Jones Industrial Average lost over 150 points, or 0.5%, as the S&P 500 traded 0.6% lower and the Nasdaq Composite declined 0.82%. All three indices are continuing to sink as of just after noon EST Wednesday.

The major stock index ETFs are also tumbling again Wednesday along with their underlying benchmarks, with the SPDR Dow Jones Industrial Average ETF (DIA), SPDR S&P 500 ETF Trust (SPY), and Invesco QQQ Trust (QQQ) all in the red and falling.

Mnuchin said around midday that getting a deal done before the election would be challenging, given that there is still little compromise happening, but that lawmakers are making progress in some areas. Investors have been eagerly anticipating a stimulus for months, only to be dealt delay after delay, which may be ultimately dampening sentiment.

The benchmark stock indexes had notched gains earlier in the day as traders pored through another batch of corporate earnings, including those from Goldman Sachs.

The banking giant reported significantly better-than-anticipated quarterly earnings driven largely by robust bond-trading revenue. Goldman shares were down slightly, but have since recovered some.

Goldman wasn’t the only bank with earnings to report. Bank of America’s earnings beat analyst expectations but the bank’s revenue was less than projected, sending the stock down 4%. Meanwhile, Wells Fargo shares tumbled nearly 5% as the bank’s third-quarter earnings missed expectations, plagued by low interest rates.

Despite the significant misses, analysts were optimistic.

“On the earnings overall, so far so good,” said Brent Schutte, chief investment strategist for Northwestern Mutual Wealth Management. “You’re going to see a broadening of earnings growth from where it was, concentrated in a few names, into more sectors and companies.”

In addition to discouraging news of a stalemate in Congress over stimulus, stocks broke their consecutive winning streak on Tuesday after amid news from Eli Lilly that it would halt its trial of a coronavirus antibody treatment. There was a similar announcement from Johnson & Johnson’s earlier, stating that the company would pause its vaccine trial following an “adverse event” that was reported. The details of the event remain unclear.

“Markets are now hoping for (and trading on) a smooth election, a big stimulus, the end of the pandemic, and the economy being back to 2019 normal early next year,” said Brad McMillan, chief investment officer at $200 billion Commonwealth Financial Network.

McMillan did express some concern however, stating, “While the economy continues to recover, job growth has slowed substantially even as layoffs remain very high—and we are still only halfway back to pre-pandemic employment levels.”