You are at:Home»Featured»Stocks, ETFs Move Higher As President Trump Is Acquitted By Senate 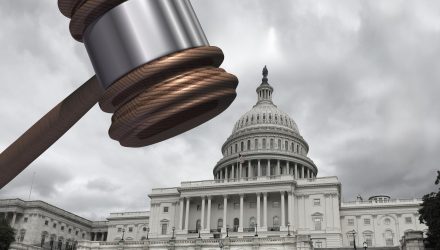 In a result that has been expected for some time now, the Senate voted on Wednesday to acquit President Donald Trump on both counts in his impeachment trial, giving markets an extra boost in after hours trading, after a series of back-to-back up days.

Forty-eight senators, including one Republican, found Trump guilty of abuse of power, while 52 Republicans, voted to acquit him.

The president was also impeached on the charge of obstruction of Congress, in which he was found not guilty by a group of 53 Republicans, while the remaining 47 senators voted to convict.

The biggest surprise however, came from Sen. Mitt Romney, who delivered a scorching criticism of the president’s actions prior to the vote, breaking with his party to convict the president on the abuse of power count.

Romney, who was a presidential candidate in 2012, has been a vocal critic of President Trump, although this move, which was praised by many as being bold, could alienate him with voters as well.

Trump’s defense team and allies had argued multiple times that the impeachment and removal trial were not bipartisan, seeking to overturn the proceedings. Following the vote, Trump’s lawyer Jay Sekulow said he had “no reaction” to Romney’s vote to remove the president. Asked about bipartisan nature of conviction, he repeatedly said, “it was one vote on one count.”

Democrats claim Trump was trying to cheat in the 2020 election by blackmailing a foreign ally to vilify his possible political opponent with the smudge of a criminal probe. They also say that he obstructed Congress by refusing to deliver any documents in the House’s probe, and by pressuring potential witnesses not to cooperate.

With the Brexit, global economic uncertainty, the ongoing trade war with China, and the recent coronavirus contagion, investors have one less concern now with the conclusion of the impeachment proceedings.

U.S. markets are made another run at all-time highs Thursday, coming within spitting distance.