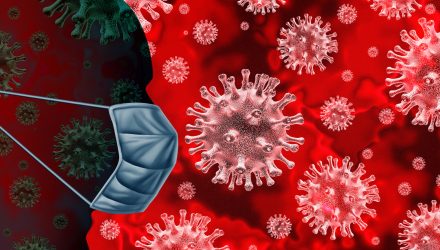 Stocks sank into the close on Tuesday after trading mixed to lower throughout the session as fears about the coronavirus spreading even faster and easier tempered investor sentiment.

The Nasdaq Composite, which had rallied earlier in the session by as much as 0.8%, lost 0.8% in afternoon trading, while the Dow Jones Industrial Average plummeted 413 points, or 1.6% in a matter of minutes, as the S&P 500 shed 1.1%, sinking quickly into the close.

Tech-stocks had led the way earlier in the session, with the Vanguard Information Technology ETF (VGT) adding more than 0.5%. But shares of major tech companies sank after trading higher, with Amazon dropping 1.1% to lead the tech lower. Netflix also traded slightly lower after hitting a record high earlier in the day.
“It’s the same group of stocks that lead us higher almost on a daily basis,” said Peter Cardillo, chief market economist at Spartan Capital Securities. “The rest of the market follows, but it’s certainly nowhere near as strong as that group.”

Both the Nasdaq and S&P 500 were attempting to notch six-day winning runs before Tuesday’s losses. The Dow also rallied in back-to-back sessions.

Some analysts seemed unsurprised by the drop.

“This market is way overbought,” said Peter Cardillo, chief market economist at Spartan Capital Securities. “This market has been ignoring the potential problems that are going to arise from the coronavirus.”

Others see more protracted volatility, predicting that another national shutdown is unlikely.

“With the increasing virus cases, people are playing the stay-at-home stocks,” said Brent Schutte, chief investment strategist for Northwestern Mutual Wealth Management. “One thing I will say is the probability of returning to a nationwide lockdown is incredibly slim. So I wouldn’t be surprised to see more of a rolling, back-and-forth market rather than one that goes straight up like we’ve seen the past few months.”

More than 2.93 million coronavirus cases have been confirmed in the U.S. with more than 130,000 deaths, according to Johns Hopkins University. Over the weekend, more than 20 states reported a hospitalization growth rate of at least 5%.